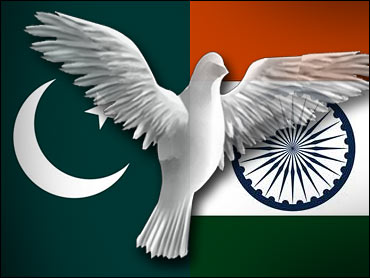 India and Pakistan said Friday they will soon hold their first talks in almost two years aimed at ending five decades of war and acrimony between the nuclear-armed neighbors.

"This round of talks will be decisive," Prime Minister Atal Bihari Vajpayee told Parliament, "and at least for my life, these will be the last."

Pakistan later said it had agreed to restore full diplomatic ties with India.

Vajpayee, 78 and ailing, has indicated he would like to leave a legacy of peace between India and Pakistan.

The two countries went on war footing last year after India blamed Pakistan for an attack by Islamic militants on the Indian Parliament in December 2001. Pakistan denied involvement. Tensions eased after intense diplomacy by the United States and Britain.

Last week, Vajpayee conditionally offered talks with Pakistan on the disputed Himalayan region of Kashmir and other issues. Pakistani President Gen. Pervez Musharraf has voiced some skepticism over the offer, but said it was a sign of improvement.

"We are committed to the improvement of relations with Pakistan and we are willing to grasp every opportunity for doing so," Vajpayee told Indian lawmakers.

He said he is restoring civil aviation links that were broken last year, and will appoint a new ambassador to Islamabad.

Hindu India and Muslim Pakistan, divided since the British granted independence in 1947, have fought three wars — two of them over Kashmir, a region divided between them that both claim. In 1998, both countries tested nuclear weapons.

Vajpayee did not directly answer Parliament members' questions about whether he was changing India's policy of not holding talks with Pakistan until Islamic militants stop crossing the frontier to wage attacks in India.

India accuses Pakistan of aiding the militants. Pakistan says it only offers the fighters moral support.

Vajpayee said he was trying for "a third time" to make permanent peace with Pakistan.

In 1999, he traveled to Lahore to meet with then-Pakistani President Nawaz Sharif, but a few months later the two nations were involved in what India calls the Kargil War in the mountains of Kashmir.

Musharraf, who led the Pakistani forces in that confrontation, later deposed Sharif in a bloodless coup.

Vajpayee invited Musharraf to talks in the Taj Mahal city of Agra in July 2001. There were no agreements, and in December the Parliament attack ended contacts.