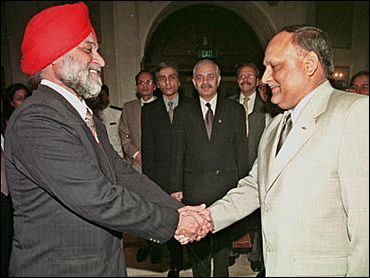 India and Pakistan agreed on Monday to restore airline overflight and landing rights by Jan. 1, two years after the South Asian nuclear rivals ended all transportation links amid tensions that took them to the brink of war.

The agreement — reached during talks between aviation and defense ministry officials meeting in New Delhi — was announced in a joint statement that said, "The two sides agreed to resume simultaneous air links and overflights with effect from Jan. 1, 2004 on a reciprocal basis."

"The talks have been successful," said India's director-general of civil aviation, Satendra Singh. He met with six Pakistani officials, led by Mohammed Ashraf Chaudhry, a retired general and a secretary in Pakistan's defense ministry.

If the flights are restored by Jan. 1, it will be just in time for a South Asian nations summit in Pakistan that Indian Prime Minister Atal Bihari Vajpayee has said he will attend.

Before air links were cut in January 2002, Pakistan International Airlines flew from Lahore to India's capital, New Delhi, and Indian Air Lines flew from Bombay to Pakistan's commercial hub, Karachi. Both countries' carriers could fly over the other's territory to other destinations.

Hopes of a breakthrough at the New Delhi talks had brightened after Pakistan's President Gen. Pervez Musharraf on Sunday said his country was ready to allow Indian carriers to fly over Pakistan air space.

Flights from India to Europe and Central Asia currently have to take a two-hour detour over the Arabian Peninsula because they cannot pass through Pakistani air space. India's ban on Pakistani overflights makes long detours necessary on flights to Nepal and China.

The resumption of air links "is great news because it will facilitate trade between the two countries," said Muhammad Saeed Shafique, senior vice president of the Karachi Chamber of Commerce and Industry, the main representative body of Pakistani businessmen.

The agreements are another step in the gradual thaw in relations between the two nations, which reached the brink of war last year after a December 2001 terror attack on the Indian Parliament.

India blamed Pakistan's spy agency for the attack and snapped all road, rail and air links between the two. Islamabad denied the charge and matched India's measures.

Since April, when Vajpayee called for a resumption of dialogue to resolve their differences, the two countries have restored a bus link, posted new ambassadors, and last week began a cease-fire along their shared frontier.

That includes the border that divides the disputed region of Jammu-Kashmir between them, where firing occurred almost daily before the truce.