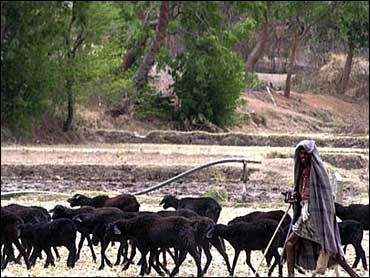 Large parts of India sweltered under an ongoing heat wave that has killed at least 1,246 people in three weeks and sparked deadly forest fires in the northern Himalayan foothills, officials said Wednesday.

Sunstroke and dehydration have killed at least 107 people in other parts of India, and thousands have been hospitalized.

An official in northern Uttar Pradesh state, where 83 have died, said Wednesday the toll was expected to go up as information about more deaths trickled in from remote villages, he said.

Deaths due to the heat have also been reported in Orissa, West Bengal and Jharkhand states.

The death toll is the highest since 1998, when more than 2,500 people died from intense heat.

The temperature in New Delhi, the national capital, hit 114.08 degrees for the second day Wednesday.

Authorities issued warnings asking people to stay indoors or cover up when outside, and to drink plenty of water.

Relief is on the way, meteorologists say. Annual monsoon rains, which are nearly a week late, are expected to break the hot spell this weekend.

Water shortages have aggravated the suffering. Rivers, lakes and wells have dried up and people were facing acute shortages of drinking water in many desert states, also hit by drought.

Most of the victims have been poor, especially in villages where few have ceiling fans or adequate drinking water.

Authorities were organizing drinking water camps for the poor. Women carrying earthen pots walked up to three miles from remote villages to collect water, often saline or muddy and unfit for consumption.

Despite the heat, construction workers and rickshaw pullers continued working, although with frequent breaks and with their heads wrapped in wet cloth.

"This is not enough, but we have to go on. People keep getting sick in this weather but there is no other way,'' said Shaikh.

Poor farmers and traders have had to watch their scorched fields and businesses suffer. The intense heat has devastated poultry farmers in Andhra Pradesh, with 2.7 million chickens dying in the last two weeks.

Water scarcity had also hit wildlife in the state and there were reports of animals raiding villages in search of food and water, said K. Venkaiah, a forest warden.

"We have appealed to people not to harm these animals. People have responded with compassion and kindness and are providing water and food to rabbits and deer despite their own difficult condition," he said.

Near Hyderabad, hordes of monkeys raided villages in search of water.

In Warangal district of the state, villagers caught frogs, marched around the village with them and "married" them off, in an ancient ritual to appease the rain gods.