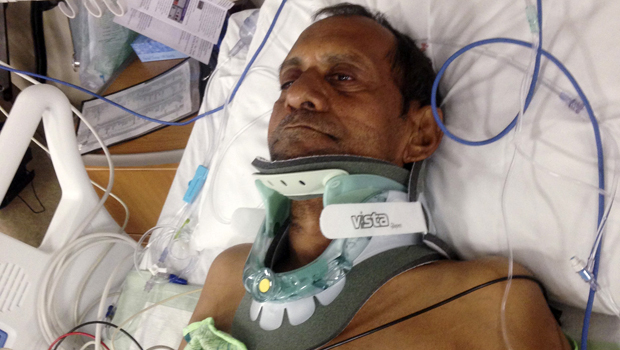 MADISON, Ala. -- The Indian government is "extremely disturbed" by the treatment of a 57-year-old grandfather from that country who was roughed up by police while walking in a suburban neighborhood in Alabama, a spokesman said Friday.

Syed Akbaruddin, a spokesman for India's External Affairs Ministry, said the government took the incident "very seriously" and was in contact with the U.S. mission in New Delhi.

The government also will contact officials in Washington and Alabama, Akbaruddin said in response to reporters' questions in New Delhi about the treatment of Sureshbhai Patel in the Tennessee Valley city of Madison.

"What we will communicate is that we are extremely disturbed," he said. "This is a matter of concern for us, and India and the U.S. as open pluralist societies need to address these issues and find ways in a mature manner so that these are aberrations and are not the norm."

Madison police officer Eric Parker was arrested and is being fired after Patel was slammed to the ground and injured while visiting relatives in the town, located near Huntsville. An attorney for Patel said the man suffered partial paralysis in the incident but hopes for a full recovery.

The officer has not commented publicly and court records are not yet available to show whether he has a lawyer.

As word of Patel's treatment and injuries spread, a site established on gofundme.com to help cover medical and other expenses generated more than $58,000 in donations in a day by midday Friday. Hank Sherrod, the family's attorney, said Patel does not have insurance.

Police stopped Patel while he was walking on a sidewalk in his son's neighborhood on Feb. 6. Sherrod says the man was stopped and hurt at least partly because of his dark brown skin.

"I think skin color made him more likely to be a victim of police power," Sherrod said Friday.

Patel, who suffered injuries including partial paralysis of his legs, has filed a federal lawsuit that says his civil rights were violated. The lawsuit seeks an unspecified amount of money.

Dashcam video and audio recordings of 911 calls released by the Madison Police Department showed that a man called police complaining that an unfamiliar man was walking in the neighborhood and peering toward garages.

"He's a skinny black guy. He's got a toboggan on," said the caller, who isn't identified.

Police arrived in patrol cars within minutes. Video shot from inside one of the cruisers shows two officers approaching the man on the sidewalk and attempting to talk to him.

With country music playing audibly on the car's radio in the video recording, two officers approach the man on foot.

Police pepper the man with questions about what he is doing and where he is going, but any answers are inaudible and someone on the recording is heard saying, "no English." Patel appears to try to walk away and one of the officers warns: "Do not jerk away from me again."

One of the officers, neither of whom is identified, then slams Patel face-first into the ground less than 90 seconds after the confrontation began.

"He don't speak a lick of English," one of the officers says as another officer arrives at the scene.

"I found that Officer Eric Parker's actions did not meet the high standards and expectations of the Madison City Police Department," Muncey said.

Madison, a bedroom community of about 46,000 people, is located near high-tech businesses, the University of Alabama-Huntsville, and NASA's Marshall Space Flight Center.