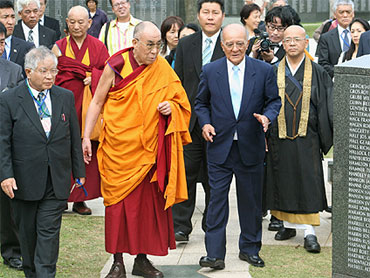 India effectively barred foreign journalists Thursday from covering a rare visit by the Dalai Lama to a Buddhist monastery close to Tibet in an apparent effort to ease Chinese anger by reducing news coverage of the trip.

The exiled Tibetan spiritual leader's planned visit Sunday to the northeastern state of Arunachal Pradesh — the heart of a long-running border dispute between China and India — has inflamed already heightened tensions between the Asian powers.

Foreigners traveling to the remote mountainous state need special permission from the Indian government. Most foreign journalists did not receive permission to cover the Dalai Lama's visit. On Thursday, four journalists who had been given permits — including two Associated Press staffers — had them revoked.

"We are incredibly surprised and disappointed to learn that reporters' visas to Arunachal Pradesh have been canceled ahead of the Dalai Lama's visit," said Heather Timmons, president of the New Delhi-based Foreign Correspondents' Club.

Indian journalists are allowed to cover the trip.

China opposes most activities of the Dalai Lama, who lives in exile in India. Beijing accuses him of advocating independence from Chinese rule for his native Tibet, though he denies it.

Although relations between India and China have improved in recent years, tensions have flared recently because of sharpening economic rivalries, lingering bitterness over their disputed border and unrest in Tibet — the Chinese-controlled Himalayan region on the Indian frontier.

Earlier this week, China said it strongly opposed the Dalai Lama's plans to spend five days at a Buddhist monastery in the town of Tawang near the disputed border. China is concerned that the visit infringes on its claims to Arunachal Pradesh and its control over nearby Tibet.

Dibyesh Anand, a political analyst at Westminister University in London, said the Indian government felt it had to let the Dalai Lama visit Arunachal because it owed a favor to local politicians there.

"Now they want to minimize the (news) coverage, so that while assuaging the local elite, they don't provoke China," he said.

Last week, the Dalai Lama said China was overpoliticizing his travels, adding that his decisions on where to go were spiritual in nature, not political.