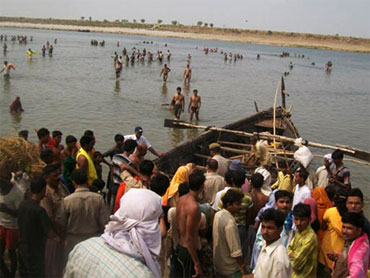 At least 24 people drowned and 11 others were missing after a boat capsized on the Ganges river in northern India early Monday, police said.

The crowded vessel was carrying 60-70 people traveling to a temple for a religious function, according to local police official Shivendra Yadav.

Passengers on the boat, which was meant to carry about 30 passengers, were mostly women and children from Ujveria village in Uttar Pradesh state, who were going to visit a temple across the river, Yadav said.

"As the boat entered the midstream it failed to take the weight of the people and collapsed," Yadav said.

Twenty-five people managed to swim to safety. Yadav said rescuers had recovered 24 bodies by late Monday afternoon and were still working in the area.

The rescuers were searching for at least 11 others, Yadav said. Ten of the survivors were still being monitored at a local hospital, he said.

The incident took place in Ballia, 250 miles southeast of Lucknow, the state capital of Uttar Pradesh.

Boat tragedies are common in the impoverished state. Vessels used to ferry passengers are generally rickety and overcrowded and people seldom use life jackets.