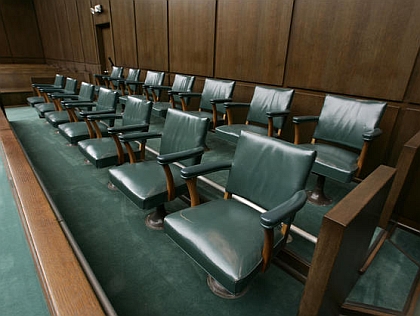 (CBS/WCBS) NEW YORK - Was she trying to get out of jury duty? Or when she wrote in the questionnaire that "African-Americans, Hispanics and Haitians" are the three people I admire the least - is that how she really felt?

Either way, it did get her off the jury.

But that was only the beginning of a drama between juror and judge, according to CBS affiliate WCBS.

The courthouse where Federal Judge Nicholas Garaufis presides has been abuzz over the action he has taken against a potential juror when he questioned why she wrote things like quote "African-Americans, Hispanics and Haitians" are "the three people I like the least." A lot of people thought she was trying to get out of jury duty.

The juror is a young Asian woman, and she had written that she has a relative who's in a notorious Chinese gang. So Judge Garaufis sarcastically asked, "Why didn't you put 'Asians' down also?"

The juror responded, "Maybe I should have."

The judge then exploded, saying "This is an outrage, and so are you!"

He excused her from the panel, but then ordered her to come to court for jury duty - every day.

But after a sentence of just one day, the judge let the juror go, saying he hoped she'd learned her lesson.