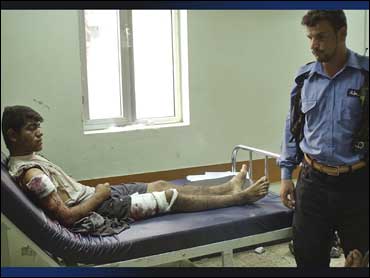 It goes against religious taboos in Iraq to involve women in fighting, but three recent suicide bombings carried out by women could indicate insurgents are growing increasingly desperate.

The female suicide attacks come as U.S.-led coalition forces are increasingly catching militants suspected of training women to become human bombs or finding evidence of efforts by al Qaeda in Iraq to recruit women, according to military records.

With coalition forces pushing extremists out of former strongholds and shrinking their pool of potential recruits, the militants are being forced to come up with other methods to penetrate stiffened security measures, said Diaa Rashwan, who follows Islamic militancy for Egypt's Al-Ahram Center for Political and Strategic Studies.

"There's a sense that this is an act of desperation," said Col. Donald Bacon, a U.S. military spokesman in Baghdad.

Female suicide bombers are a small part of the insurgents' battle to force U.S. troops from Iraq and rattle Shiites from newly acquired power. Women have been responsible for 14 of 667 suicide attacks since May 2005, or 2 percent. They have caused at least 107 deaths, or 5 percent of the 2,065 people killed during this time period, according to Associated Press statistics.

But those attacks appear to be increasing.

In November and December, women carried out three suicide bombings in Diyala province, one of Iraq's most violent areas, where al Qaeda in Iraq has a stronghold. The last female suicide bombing had been in July.

On Nov. 4, a woman detonated an explosives vest next to a U.S. patrol in Diyala's regional capital, Baqouba, 35 miles northeast of Baghdad, wounding seven U.S. troops and five Iraqis. On Dec. 7, a woman attacked the offices of a Diyala-based Sunni group fighting al Qaeda in Iraq, killing 15 people and wounding 35. Then, on Dec. 31, a bomber in Baqouba detonated her suicide vest close to a police patrol, wounding five policemen and four civilians.

Devastating attacks continue in Iraq even as Iraqi casualties are down by 55 percent nationwide since June 2007, according to an AP count. American and Iraqi forces, and thousands of Sunni tribal groups who turned against al Qaeda in Iraq, have pushed the extremist group from Baghdad and Anbar province west of the capital. The al Qaeda fighters have moved into Diyala northeast of Baghdad and farther north into Mosul, 225 miles northwest of the capital.

The tightening noose - at least for now - appears to be prompting the militants to turn to women attackers, Rashwan said, noting that extremist Muslim groups use women only when they see no alternative.

"Women should be in the last rows" of fighting, he said. "So to see women (suicide bombers) shows an abnormal situation - the absence of men."

Women have acted as suicide bombers for other causes. The first known female suicide bomber was Sana Mheidali, a Lebanese who killed two Israeli soldiers in 1985. Female Tamil Tiger rebels in Sri Lanka have carried out at least 60 suicide bombings in 24 years. Palestinian Muslim militants send out women suicide bombers, as does the Kurdistan Workers Party, or PKK, which has waged a guerrilla war since 1984 for autonomy in Turkey's southeast.

Because of Muslim cultural sensitivities, women can be excellent candidates for suicide attacks when there are no female security guards. Most Iraqis are conservative Muslims who believe physical contact is forbidden between women and men not related by blood or marriage. As a result, women are often allowed to pass through male-guarded checkpoints without being searched. In October, the U.S. Army trained 20 women to work as security guards in a Baghdad suburb after a female suicide bomber entered a nearby building without being searched.

"We know it's a tactic that al Qaeda in Iraq is trying to use," Bacon said.

At least twice in December and once in August, al Qaeda members suspected of training women to use suicide belts were captured, the U.S. military has said. There are no military reports before August indicating suspicion of al Qaeda in Iraq training women attackers.

Some female bombers appear to be motivated by revenge, like the woman who killed 15 people in Diyala province on Dec. 7. She was a former member of Saddam Hussein's Baath party whose two sons joined al Qaeda in Iraq and were killed by Iraqi security forces.

But other women may be ideologues, just like their male counterparts, said Mohammad Hafiz, a University of Missouri professor who focuses on Muslim extremism.

Still others are influenced by relatives and spouses, "especially those dependent on them emotionally or materially," Hafiz said.

One of them, Sajida al-Rishawi, was married to a suicide bomber. The Iraqi woman tried unsuccessfully to detonate her explosives belt in an Amman, Jordan hotel on Nov. 9. 2005. Her husband and their other accomplices succeeded in blowing themselves up, however. Three hotels were bombed, and 60 people were killed.