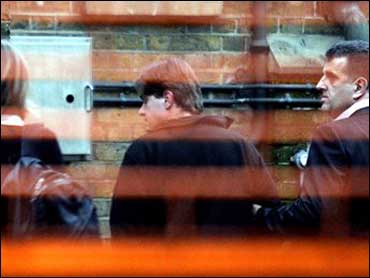 The British man accused of shooting his wife and baby to death in the family's Massachusetts home is expected back in the United States from England Wednesday for an arraignment Thursday, according to CBS News Correspondent Bianca Solorzano, citing Scotland Yard.

He was arrested late last week, and agreed to extradition.

Entwistle's lawyer in England, Judith Seddon, told reporters he "wants to cooperate with the authorities in any way he can, and he's anxious that a delay may cause his late wife's family, and his own, additional distress, something he wishes to avoid."

There will be extra security when Neil Entwistle is arraigned at the district courthouse in Framingham, Mass., reports Christina Hager of CBS station WBZ-TV in Boston.

She says the judge may order a psychiatric evaluation and, since Entwistle has no known assets, he will probably get a court-appointed attorney.

Legal experts tell Hager the evidence that has been made public so far against Entwistle is overwhelming. Not only do authorities say his DNA was found on the murder weapon, along with that of his wife but, they say, he never called 911, and fled to England the day after the murders.

Also, Entwistle didn't show up for the funeral of Rachel Entwistle and nine-month-old Lillian Entwistle.

Rachel's family is expected to be at Neil's arraignment, says Solorzano, who observes that more than 200 pages of recently released court documents are providing a window on the murders.

Solorzano says the documents detail serious financial problems in the family, with one state trooper declaring that the Entwistles "had accumulated a sizable amount of debt and may have been living well beyond their means."

The documents seem to point out inconsistencies in Entwistle's story, investigators note. He told police, once he found his wife and child dead, he went to his in-law's house to get a gun to shoot himself. And though he says couldn't get inside, police found keys to that house in Entwistle's car. Police allege that gun is the murder weapon, and in a strange twist, the documents show that, the day after the murders, Rachel's stepfather used that gun at a shooting range, before he knew about the killings.

Some of Entwistle's other statements don't appear match the evidence, either, Solorzano adds.

"The description of the bodies really didn't match what the police found at the scene," says CBS News legal analyst Wendy Murphy. "I think this is a guy who is desperately trying to cover up what he had done, but really couldn't even get his story straight."