With millions of people expected to head to Washington this weekend, it's certainly a question on many people's minds: How cold is it going to be on Inauguration Day? 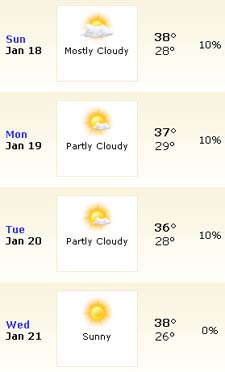 (The Weather Channel)
And now with just a week to go, we can start to get a look at the long-term weather forecast for the big day. According to The Weather Channel, it looks to be a partly sunny day with a high of 36 degrees and a low of 28. Just a 10 percent chance of precipitation thus far.

AccuWeather is predicting the high will be 35 degrees.

That's a little below the average high of 42 in Washington for the day - but not as bad as it could be, particularly in light of warnings that spectators may have to "stand outside in cold weather in a large crowd for up to six hours."

So it looks good for President-elect Obama to continue his lucky streak when it comes to the weather -- you'll recall that Obama's outdoor convention speech in Denver and his Election Night party in Chicago were free from precipitation.

Click Here For All Of CBSNews.com's Special Inauguration Coverage

Still, when it comes to the weather, nothing is certain: The Washington Post reports that according to AccuWeather there is a weather system in the northern Pacific "which might or might not come this way Monday and might or might not bring snow."

"A lot of things could happen between now and then," senior meteorologist Tom Kines told the Post.