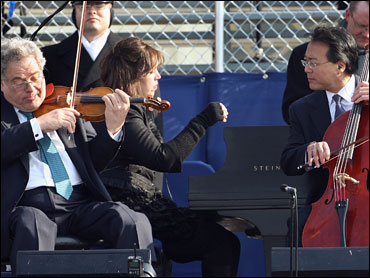 (AP Photo/Ron Edmonds)
Barack Obama's Inaugural committee has acknowledged that the classical music quartet recorded the performance that was heard by spectators and the world on Inauguration Day.

People sitting near the quartet of cellist Yo-Yo Ma, violinist Itzhak Perlman, pianist Gabriella Montero and clarinetist Anthony McGill could hear them play the piece "Air and Simple Gifts," written by John Williams. But anyone else in the massive crowds or watching on TV (or online) heard an audio recording made two days earlier, which the performers played along with.

Spokeswoman Carole Florman told the Associated Press and the New York Times (which first reported the story) that they were worried the weather, which was around 30 degrees during the ceremony, would cause the instruments to break or be out of tune.

"This isn't Milli Vanilli," Florman told the AP. "They had to perform in such cold weather, the instruments couldn't possibly be in tune. They were able to play in sync with the tape. It's not unusual."

"It would have been a disaster if we had done it any other way," Perlman told the Times. "This occasion's got to be perfect. You can't have any slip-ups."

Added Yo-Yo Ma: "I really wanted to do something that was absolutely physically and emotionally and, timing-wise, genuine… We also knew we couldn't have any technical or instrumental malfunction on that occasion. A broken string was not an option. It was wicked cold."

Florman said the other acts recorded their performances but decided during the walkthroughs beforehand to have the live performance broadcast. Aretha Franklin also was accompanied by taped music and voices.