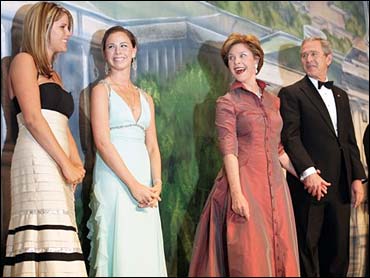 Every four years, we celebrate the election of the president of the United States.

And every four years, his wife has an opportunity to show off her new inaugural gown. It is a time of great anticipation and speculation.

In the spirit of that tradition, Valerie Steele of New York's Fashion Institute of Technology took The Early Show back through the gowns that have led to this year's dress by Oscar de la Renta worn by Mrs. Bush.

The gown is significant, Steele tells co-anchor Hannah Storm, because it is the way the first lady presents herself to the world.

It is "a snapshot image of the American presidency and America. Americans have a lot of ambivalence about fashion, but on ceremonial occasions, they want the first family to be America's royal family."

The first lady who always made a fashion statement was Jacqueline Kennedy. Her choice of fashion was somewhat criticized throughout the campaign. Her inaugural gown in 1961 was a concept by Mrs. Kennedy, made by Ethel Frankau at Bergdorf Goodman. It is described as off-white sleeveless gown in chiffon.

"What you see with the inaugural gown is the triumph of her own personal style," says Steele, "To use fashion as a way of representing her husband's presidency - to look modern, elegant, simple and American. This is a very, very classic, a perfect kind of ceremonial dress for the president's wife."

Lady Bird Johnson had a very tough act to follow. Her 1965 A-line gown in jonquil-yellow double-weave silk by John Moore was highly criticized, which is quite unfair, says Steele, pointing out, "Anyone would have looked not as good after Jackie Kennedy, and maybe it's also a problem with yellow."

In 1969, Pat Nixon wore a gold and silver gown made of mimosa silk satin, adorned with Austrian crystals, by Karen Stark for Harvey Berin. Steele points out, "In the late '60s, fashion was inspired by the hippie look and she couldn't do that by her husband's politics. So she had to wear a slightly antiquated gown."

Rosalynn Carter wore the same gown she had worn for her husband's gubernatorial celebrations. The blue chiffon gown with gold trim at neck, waist, and cuffs was paired with sleeveless coat. The outfit was bought at a store. The 1977 gown, made by Mary Matise for Jimmae, wasn't couture.

Notes Steele, "I think she was trying to make a statement about being economical and being 'just folks,' like Jimmy wearing a sweater instead of a suit."

In 1985, for her husband's second inaugural, Mrs. Reagan was criticized for an inauguration wardrobe that a news account put at more than $46,000. At the time, Mrs. Reagan's spokeswoman said the estimate was high.

Also by James Galanos, it was a white chiffon, beaded gown with Art Deco design and bolero effect. The Austrian and Czechoslovakian glass beads took more than 300 hours to apply by hand.

A first lady who was not so much criticized was Barbara Bush. "People liked her," notes Steele. "They thought of her as a friendly grandmotherly figure.

Somebody criticized very much for her wardrobe was Hillary Clinton in 1993. She chose a little-known designer for her first gown, Sarah Phillips. Mrs. Clinton wore a violet beaded gown with blue-velvet silk overskirt, as well as an overcoat in violet and gold velvet.

"It was not perceived well," says Steele, "But in general, in the beginning especially, she was seen as someone who knew nothing about fashion and appearance. She was a modern businesswoman."

Like Laura Bush, Mrs. Clinton opted for de la Renta for the balls honoring her husband's second inauguration in 1997. It was a sparkly gold-embroidered gown; sexy and sleek, with a flared skirt and a sheer bodice.

De la Renta designed an ice blue and silver embroidered tulle V-neck dress with a matching duchess satin coat. One writer described it as, "youthful and feminine, not sexy -- the epitome of good taste."

Jenna and Barbara Bush are wearing gowns by Badgley Mischka.