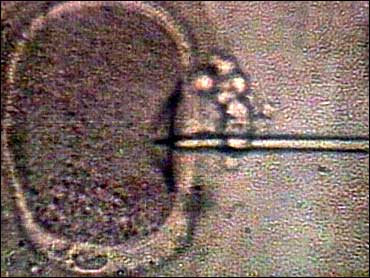 More than a million babies have been born with the help of fertility technology since the birth of the first test-tube baby 25 years ago. Now there are new guidelines being proposed to regulate the growing and increasingly sophisticated fertility industry. The Early Show medical correspondent Dr. Emily Senay reports.

Advisers to President Bush are urging a closer look at the previously unregulated fertility industry. They want Congress to indicate what kinds of technologies doctors will be allowed to use to help infertile couples have children, and they want more data, patient education and self-monitoring from fertility doctors.

The advisers are also calling for new research into the long-term health of babies born with the aid of techniques like in-vitro fertilization. That's where doctors help with conception outside of the body by uniting egg and sperm under a microscope, and then implanting the resulting embryo in the womb to attempt a pregnancy.

These techniques have helped many infertile couples and resulted in countless happier families. But very little follow-up study has been done on these children, and nobody knows exactly how their health compares to that of other babies.

As we get better at these fertility techniques and genetic science advances, controversial new possibilities like genetic screening, genetic manipulation, and sex selection are becoming a reality, not to mention the use of these techniques for controversial practices like human cloning and the creation of human embryos to use in stem cell research. These new guidelines represent an effort to keep track of these new possibilities and provide a way for Congress to prevent irresponsible use of the science without interfering with research that could lead to new innovations in health care.

The report calls for a ban on some new technologies and procedures, including human cloning for making babies. One of the main recommendations is that the creation of embryos for reproduction should only be allowed by the union of a sperm and an egg.

Cloning doesn't involve sperm at all, but takes DNA directly from an adult donor cell to replace the genetic material of a female egg, thus creating an embryo that is genetically identical to the donor.

The new guidelines say no to this kind of reproductive cloning, and also suggest a ban on other unethical practices like cloning a human in order to harvest organs, or combining animal and human DNA.

When it comes to stem cell research using human embryos, the recommendations suggest a limit on using embryos older than 14 days for research. They stop short of suggesting a total ban on therapeutic cloning for research.