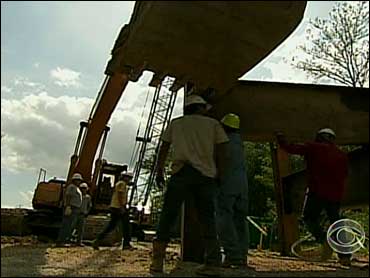 "I would like to see all our crews working on jobs," said Sam Baggett of Ford Construction.

This job means Robin Patterson is off unemployment for the first time since November.

Patterson and his wife Tiffani almost lost their house -- and their marriage.

"We split up three times," Tiffani Patterson said. "And when he started back to work, it's like everything changed."

This almost $1 million project alone put 157 people back on the job.

Tennessee has 95 counties. And by July, its stimulus money will put people to work in almost all of them.

The bridge project also gives business to 13 subcontractors and suppliers - like Williams Equipment and Supply.

But it's a start - this project to rebuild bridges and hope.