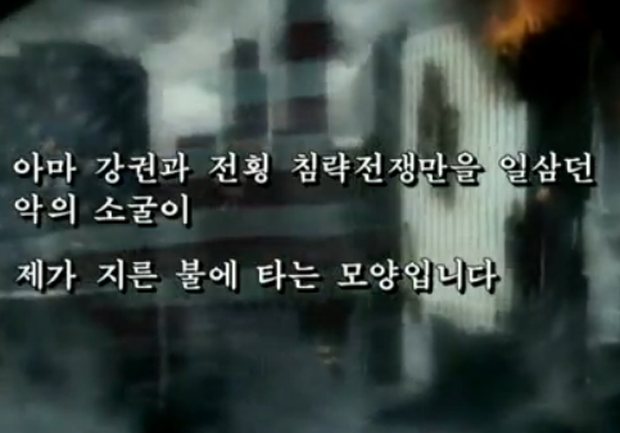 When Michael Jackson and Lionel Richie penned "We Are The World" in 1985, they probably never envisioned the Africa charity song as a soundtrack to a North Korea propaganda video.

But an instrumental version of the iconic song is the musical centerpiece of a new video that depicts a North Korean bombing of America.

The video, interspersed with an animated space shuttle and patriotic flag waving, culminates with an all-out aerial assault on an unspecified U.S. metropolis, followed by a massive explosion.

Then we see (presumably) real footage of a Pyongyang rocket launch, punctuated by the image of a dreaming North Korean man.

The translation of the text at one point reads: "I see some black smoke somewhere in America. Perhaps the devil's dungeon dictating to everyone is burning by the fire I created."

"The DPRK (Democratic Peoples Republic of Korea, or North Korea) has drawn a final conclusion that it will have to take a measure stronger than a nuclear test to cope with the hostile forces nuclear war moves that have become ever more undisguised," the North's KCNA state news agency said, according to Reuters.

South Korean and U.S. troops began naval drills Monday in a show of force partly directed at North Korea amid signs that Pyongyang will soon carry out a threat to conduct its third atomic test.

Kim said that in the event of a nuclear test, he expects the U.N. Security Council to respond with "firm and strong measures."

North Korea announced last month that it would conduct a nuclear test to protest Security Council sanctions toughened after a satellite launch in December that the U.S. and others say was a disguised test of banned missile technology. The council ordered North Korea in the sanctions resolution to refrain from a nuclear test or face "significant action."

Editor's note: The original version of this story had an embedded version of the video originally posted to YouTube. However, as the BBC reports, some of the scenes in the North Korean-produced propaganda video were lifted from the popular 2011 video game "Call of Duty: Modern Warfare 3." As a result, the video game's maker, Activision, requested the video be taken off Youtube, and it was as of Tuesday afternoon. The current version of the North Korea propaganda video referenced in this article that is embedded above comes courtesy of LiveLeak.com.