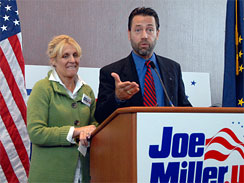 Alaska GOP Senate hopeful Joe Miller was suspended for three days and referred to an employee assistance program after admitting to improperly using three government computers, then cleaning the caches to cover up the activities, according to personnel records released Tuesday under court order.

The personnel records were obtained by The Associated Press, the Alaska Dispatch, the Fairbanks Daily News-Miner and the Anchorage Daily News, under open records requests and a subsequent lawsuit. Miller had until Tuesday afternoon to appeal the release, but chose not to.

They were released a week before the hotly contested three-way Senate race.

In a March 2008 statement to Fairbanks North Star Borough Attorney Rene Broker, Miller, who then worked as a part-time government attorney, said he had lied initially about accessing all the computers when asked and about the reasons why he used them.

He said he understood his actions were wrong, that there was "no excuse for any of it," and that he was willing to accept any punishment that was deemed appropriate, according to the records. Broker suspended him for three days and referred him to an employee assistance program, which records show he later completed.

"I appear to be the only candidate in this Senate race whose entire life history matters to the media," Miller said Tuesday in a statement about the release of the records.

He added that the records show that the computer issue and his decision to leave the borough job more than a year later were unrelated.

Miller, who defeated GOP Sen. Lisa Murkowski in the Alaska primary, has been dogged for months by questions about his work with the borough, which was a seven-year gap in his resume that he didn't include in his campaign site biography.

The issue bubbled up before the primary, when blogger and Murkowski supporter Andrew Halcro posted a piece on his website that read: "We Know Palin Quit ... But why was Miller Fired? Say it ain't so Joe."

Miller's camp then disputed any firing, claimed it was a smear and released, in conjunction with the borough, heavily redacted documents related to his tenure.

Among the exclusions were "Web activity" reports and statements from four unidentified employees from March 2008, for the period leading up to the state GOP convention in which there was a failed attempt to oust Randy Ruedrich as chairman. Miller was among those - along with then-Gov. Sarah Palin - who wanted Ruedrich out.

When reporters asked about that period, Miller declared he would no longer answer questions about his past. That prompted a former borough mayor, Jim Whitaker, to step forward to say Miller almost lost his job for using government computers in the ouster attempt.

Whitaker has said it was his understanding, based on briefings from borough officials, that Miller was engaged in "proxy voting" in an effort to oust Ruedrich. Ruedrich, whose party is backing Miller, has said that process didn't exist at the state convention.

An assistant borough attorney who was acting attorney at the time, Jill Dolan, said in a partially redacted memo that Miller admitted to using colleagues' computers "so an opinion poll would have different URLs."

"I explained to him I am not a political person and that I did not appreciate him injecting me into his mess by making it look like I voted in some poll to oust Ruedrich," she wrote, adding later: "He kept saying he was sorry and he was stupid and asked what he should say to everyone else. I told him an apology might be a good start."

Miller told her he had contacted the poll site's Webmaster to change the results so they would end at noon, apparently before he had gotten onto the computers.

Dolan said a later check of his personal website showed percentages rather than the vote count. She wrote that she "did not want Joe at work."

Whitaker said Miller didn't lose his job because he was needed for work on a pipeline lawsuit. An e-mail from Broker to an assistant borough attorney appears to bolster that, saying he "absolutely has to stay on top of TAPS," or a matter involving the trans-Alaska pipeline system.

In doling out the punishment, Broker said she considered the action an "isolated incident," and noted Miller's acceptance of responsibility. She said Miller had been under "significant stress" the last few months, and "it has affected your judgment."

Miller said the fact he is flawed shows he is like others - and is a value he brings as a candidate. He also said he wanted to clear the air in an effort to refocus attention on the issues of the Senate race.

Murkowski has questioned Miller's fitness to serve as a senator, citing what she has called his "issues with integrity and character."

"It's really stunning to me that someone who wants the highest federally elected office for Alaska shows a history, a recent history, of lying and covering up and then being caught for it," her spokesman, Steve Wackowski, said Tuesday.

Miller has said his suspension had nothing to do with his leaving the borough in summer 2009, an assertion that the records appear to support.

Miller served notice of his resignation in an Aug. 2009 letter to Broker. He wrote that she has, twice within a week's time, taken "inappropriate actions with regard to my work" - including asking that he draft a memo related to a case even though he had raised concerns about a conflict.

He also complained about the cancellation of a "long-time preapproved" leave.

In an interview on MSNBC Tuesday night, Rachel Maddow questioned the candidate about his views on same-sex marriage, and whether or not he would vote for a constitutional amendment banning it.

"That's up to the people," Miller said. "If you get a three-quarters vote ratifying - I'd vote for it. I would."