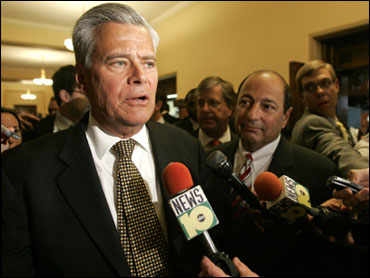 This story is from WCBS-TV in New York.

The flip of senators Pedro Espada Jr. of the Bronx and Hiram Monserrate of Queens gives Republicans a 32-30 edge in the chamber.

Call it a coup, call it a devious plan to change leadership, but at the end of the day Democrats are out of power in the New York State Senate and Republicans were.

It's a story with some really wild twists and turns.

Who could forget Espada and his run-ins with CBS 2 after we discovered he doesn't even live in his Bronx district, and wore an orange ski hat when he was confronted about it in front of his real home in Mamaroneck?

Turns out the real joke is on Espada's Democrat colleagues in the Senate after he and Monserrate, who has been indicted for attacking his girlfriend, sold out Senate Democrats and voted with the Republicans to make Rockville Sen. Dean Skelos the new majority leader.

Espada was elected President pro tempore of the Senate, which means that if something happens to Gov. Davis Paterson, he steps in.

Local Video from CBS 2 HD in New York
During the coup, Democrats fled the chamber, turned out the lights, and cut off the Internet feed of chamber proceedings, leaving Republicans and their two Democratic friends to take the vote in the dark.

It's likely the Democrats will appeal, but Republicans say everything was done by the rulebook.

A media advisory released by Mark Hansen, a spokesman for the Senate's GOP conference, foreshadowed the shake-up: "An historic change in leadership is taking place at this moment and a new bipartisan, coalition is being established that is bringing real reform to the Senate RIGHT NOW."

Check back with WCBSTV.com for more on this developing story.