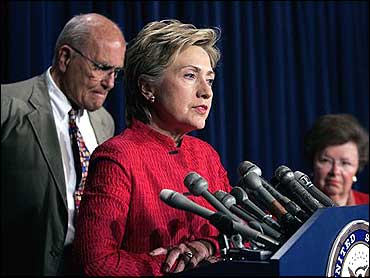 Eight days after Hurricane Katrina struck, state and federal officials say they are finally beginning to work together. But no one is denying all the mistakes — some of them fatal — that have occurred.

And finger-pointing abounds — much of it aimed at the the Federal Emergency Management Agency and its director Michael Brown — who some critics want fired.

The top U.S. disaster official waited hours after Hurricane Katrina struck the Gulf Coast before he proposed to his boss sending at least 1,000 Homeland Security workers into the region to support rescuers, internal documents show.

Acknowledging that moving in such a large crew of workers would take two days, Brown sought approval from Homeland Security Secretary Michael Chertoff roughly five hours after Katrina made landfall on Aug. 29.

With debate over the slow pace of rescue in New Orleans and elsewhere in the Gulf states growing ever angrier and louder, House leaders met Tuesday night with the Bush cabinet to discuss the situation.

Also, members of Congress are speaking in public and on television to voice their concerns.

Sen. Hillary Clinton, D-N.Y., is among those who think Brown is not doing an adequate job. She told Hannah Storm of The Early Show that

she thinks part of the trouble with the Bush administration's response (video interview)
to Hurricane Katrina is that FEMA is now operating under the Department of Homeland Security. She's sponsoring a bill to pull the agency out from under that umbrella.

The FEMA criticism flew from both current and former officials. Jane Bullock was FEMA'a chief of staff during the Clinton administration under the leadership of Director James Lee Witt. In an interview with CBS News correspondent Thalia Assuras, Bullock placed the blame for the slow, stumbling federal response squarely on the shoulders of the Bush administration.

"One of the questions I had early on is, 'Who's in charge?' Is it Mike Brown? Is it Chertoff? You don't really know. And I think that's going to be a continuing and even worse problem as we get into the recovery," Bullock told Assuras.

What should be more troubling than current stumbles, Bullock said, is that America does not seem to be prepared for the next "big one."

"We all should be very nervous," Bullock said. "If this is how they respond to a disaster that they know is happening, or know is coming — a hurricane — how are they going to respond to a dirty bomb that they don't know? I think the system is broken."

Others are more critical of actions by state and local governments.

House Majority Leader Tom DeLay says the House and Senate should conduct a bipartisan investigation of how local, state and federal governments prepared for and responded to the hurricane.

But local officials in Baton Rouge are now directing the rescue effort that seems to finally be making a difference. As CBS News 48 Hours correspondent Peter Van Sant reports, it has come only after days of national shame.

"This is bureaucracy at its worst and this bureaucracy at its worst has committed murder in the New Orleans area," Aaron Broussard, who heads a local parish just outside New Orleans, told Van Sant. "When the autopsies are finally done, they're gonna find, horribly, that many people died many days after Mother Nature had come and gone — an atrociously high number of people who could have been saved if the time had been used wisely from the beginning."

From failed Republican congressional candidate to ousted "czar" of an Arabian horse association, there was little in Brown's background to prepare him for the fury of Hurricane Katrina.

"He's done a hell of a job, because I'm not aware of any Arabian horses being killed in this storm," said Kate Hale, former Miami-Dade emergency management chief. "The world that this man operated in and the focus of this work does not in any way translate to this. He does not have the experience."

Before the storm's fury was known, FEMA had positioned smaller rescue and communications teams across the Gulf Coast. But officials acknowledged the first department-wide appeal for help came only as the storm raged.

Brown's memo to Chertoff (PDF) describes Katrina as "this near catastrophic event" but otherwise lacked any urgent language. The memo politely ended, "Thank you for your consideration in helping us to meet our responsibilities."

The initial responses of the government and Brown came under escalating criticism as the breadth of destruction and death grew. President Bush and Congress on Tuesday pledged separate investigations into the federal response to Katrina. "Governments at all levels failed," said Sen. Susan Collins, R-Maine.

Brown's memo told employees that among their duties, they would be expected to "convey a positive image of disaster operations to government officials, community organizations and the general public."

"FEMA response and recovery operations are a top priority of the department and as we know, one of yours," Brown wrote Chertoff. He proposed sending 1,000 Homeland Security Department employees within 48 hours.

Employees required a supervisor's approval and at least 24 hours of disaster training in Maryland, Florida or Georgia. "You must be physically able to work in a disaster area without refrigeration for medications and have the ability to work in the outdoors all day," Brown wrote.

The same day Brown wrote Chertoff, Brown also urged local fire and rescue departments outside Louisiana, Alabama and Mississippi not to send trucks or emergency workers into disaster areas without an explicit request for help from state or local governments. Brown said it was vital to coordinate fire and rescue efforts.

After a senators-only briefing by Chertoff and other Cabinet members, Sen. Charles Schumer said lawmakers weren't getting their questions answered.

"What people up there want to know, Democrats and Republicans, is what is the challenge ahead, how are you handling that and what did you do wrong in the past," said Schumer, D-N.Y.

Clinton, like Mikulski, called for Brown's resignation, saying she "would have never appointed such a person" and that Bush should have picked someone with more experience. On The Early Show, Clinton said that while the administration isn't securing victims' lives now, the future poses a bigger challenge.

"The real challenge is: What are we going to do to make sure their lives are not just comfortable and safe for the next week or two or three, but they are treated with the dignity and respect any of us would want to see if we were in a similar position?" Clinton said.