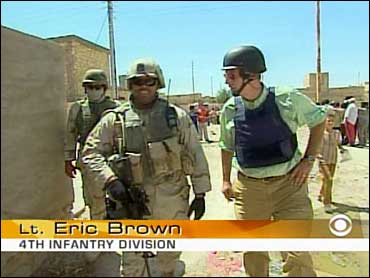 It's often difficult to tell how much progress is being made in Iraq, in large part because many areas still aren't safe for journalists to visit.

But The Early Show co-anchor Harry Smith, who'll be there all week, got a special tour of one small city, and he got a firsthand look at how U.S. troops are faring.

"We were looking for a little optimism, and a little progress, and we found it, in a place called Saba Bor," Smith says.

It's a short ride in a Black Hawk helicopter from the secure "green zone" in downtown Baghdad to Taji, an army command center northwest of the capital.

"It's funny: I feel more confident flying with these guys in a combat zone then I do sometimes flying in the states," Smith says.

Soon, Smith was going over emergency procedures as he and some soldiers headed to Saba al Bor, which Smith called "a work in progress."

He was with Col. David Thomson's outfit, from the 4th Infantry Division.

Looking for some reassurance, Smith asks Thomson: "Where we're going, should it be smooth sailing?"

"Harry, there's no guarantees in this business," Thomson says, "but, I'll do my best. It should be fairly smooth. We've had some enemy activity out there, but I think it should be relatively quiet. We'll see."

"We headed to town in our armored humvee, gunner up top, at the ready," Smith says. "Local traffic pulled over. We had our eyes peeled for IEDs (improvised explosive devices)."

At the local command center, Lt. Tyrek Swaby tells Smith that Saba al Bor is home to 60,000 people — half Shiite, half Sunni — and it's never been friendly territory.

"When we first came here in January," Swaby says, "you could see the fear in people's eyes, fear of the unknown. … But now, the attacks have dropped down significantly."

And the enlisted man sees it the same way.

"When we got here," says Pfc. Joseph Higgins, "the reaction of the people was — you'd ask how they liked Americans, and they … might say anything to you, or might not even talk to you, or they'd say, 'We don't really like Americans.' But now we're doing a lot for these people and they say, 'Yeah, Americans are good. You see it especially in children."

"Patrol starts in a sparsely populated part of town and works its way to the city center," Smith says. "These guys are armed to the teeth, but the most important thing they carry is — candy.

"It's an image we haven't seen much in three years: friendly faces, people eager to chat up an officer, even try out their English!"

One teen even tried to say his name was Bush.

It is, Smith points out, all part of an evolving U.S. policy of showing strength, but only using it when absolutely necessary.

When Smith watched the locals interacting with Lt. Eric Brown, Smith remarks, "You look like you might be one of the more popular people in town!"

And Brown replies, "When I come out, I try to treat people the way I want to be treated. So, unless they have open aggression toward us, we make sure our guys don't show any."

"The members of the 4th Infantry patrol on foot several times a day. They gain the trust of the people, and maybe even find out where the bad guys are," Smith says.

Is the 4th in the middle of a success story in Saba al Bor?

"Well," Brown says, "we'll see when we get out of here. History will tell us how successful we've been, but, yeah."

It hasn't been easy.

Just a month ago, a bomb killed 15 people there.

As Thomson describes it: "A guy drove his car up, had lettuce in the back of it, opened his trunk, and attracted a bunch of people, as if he was a vendor. He walked away from his car, had it on a remote control device, and blew up a bunch of people. They were almost rioting in here. They pelted us with rocks."

So, the 4th closed off every road into town but one, making it harder for the bad guys to get in.

No new bombings. And that, Smith underscored, "makes people happy."

The cost of the smiles has been steep.

April was a particularly deadly month.

Still, Thomson says he's convinced the sacrifices are not in vain: "As you know, we're going to have an election (in the city, the day Smith was there), and that's huge. … I don't know if we could have done that a year or two years ago (in Saba al Bor). That's freedom. So, I think those elements of freedom, those visible signs of freedom, give me a lot of reassurance that we're doing the right thing, that we're making progress."

Encouragement tempered, Smith concludes, with the realities of incidents such as one last week, when a local contractor hired to run an elective line into town to provide desperately needed power, was kidnapped. He hasn't been heard from since.