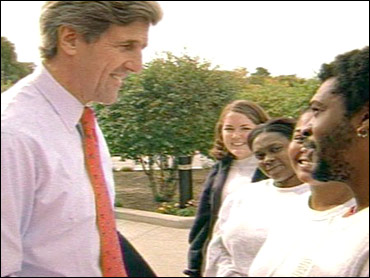 
Relatively energized, extremely serious, Sen. John Kerry spoke at the NAACP convention on Thursday in an attempt to galvanize black voters. The hard data indicates he is well on his way.

Contrary to the media's doubts about his appeal to African Americans, Kerry is producing support at a par with both Bill Clinton and Al Gore.

"Kerry having problems with black voters, this is just fantasy," said David Bositis, an expert on African American politics at the Joint Center for Political and Economic Studies. "If there is a candidate in the primaries that was the clear selection of black voters it was John Kerry."

"Kerry was the black candidate in this election," Bositis continued. "Black voters picked Kerry more than white voters did. Edwards would not have dropped out of the race if he would have won in Georgia, but white voters couldn't put him over the top."

In Georgia, Kerry received 61 percent of the black vote. His now running mate and then competitor, Sen. John Edwards, received only 25 percent. Bill Clinton got 70 percent of the Georgia primary vote in 1992. Though Mr. Clinton didn't run against an African American candidate as Kerry did against Rev. Al Sharpton (Sharpton earned a third to a fourth of the total vote in several states, including Georgia).

"It is important to note that the African American vote is not monolithic, it really does respond based on interest and where it sees its best hope for support and in that regard I think Kerry will do very well because of where he is on the issues," said former Illinois Sen. Carol Moseley Braun.

Braun is only the second popularly elected black U.S. senator (ex-Sen. Edward Brooke, R-Mass., was the first). The first Democrat and the first female, there has been no African American in the Senate since Braun left in 1998.

"I think that given the current status of our politics," Braun added, "the African American vote is much more polarized than ever before; it is possible that African Americans could support John Kerry even more than Bill Clinton and Al Gore."

There is no constituency more loyal to the Democratic Party than African Americans. Former Vice President Al Gore earned 90 percent of the black vote in the 2000 general election. Former President Clinton received 83 percent in 1992 and 84 percent in 1996.

The height of black support, 94 percent, was for Lyndon Johnson in 1964, when the Democratic Party firmly became "the party of civil rights," as Bositis put it. President Johnson's legacy is the Civil Rights Act of that year.

Republicans may be the party of Lincoln but indications are that President Bush will struggle to hold the 8 percent of the black vote he received in 2000, the lowest number since Johnson's Republican opponent of 1964, Barry Goldwater. Mr. Bush's snub of the NAACP convention on Thursday didn't help.

"The president may be too busy to talk to you," Kerry told the audience in Philadelphia, "but I have news for you: He's going to have plenty of time after Nov. 2."

There were cheers and chants of support. Kerry responded with a soft smile. President Bush rejected the NAACP invitation to speak and hasn't spoken before the body since the 2000 election.

"I think that first off it is important to note that the African American is not a monolithic, it really does respond based on interest and where it sees it's best hope for support and in that regard I think Kerry will do very well because of where he is on the issue," said former Illinois Sen. Carol Moseley Braun. (Braun is only the second popularly elected black U.S. senator. The first Democrat and the first female, there has been no African American in the Senate since Braun left in 1998.)

"I think that given the current status of our politics," she added, "it is much more polarized that ever before it is possible that the African Americans could support John Kerry even more than Bill Clinton and Al Gore."

Bositis asserts that Gore was not more well-liked by black voters than Mr. Clinton but that his increased numbers were a reflection of the great approval for Mr. Clinton in the black community.

Bositis says it's unfair at this point in the election to compare Bill Clinton and John Kerry. "Clinton's support occurred in the second term," he added.

It was in the second Clinton term that black household income rose $5,000 while white household income increased $4,000. From 1996 to 2000, African Americans saw record low unemployment and record high home ownership.

But clearly, Kerry is no Clinton, at least in terms of personality. Kerry is firm and formal where Mr. Clinton is pliant and personable. Edwards is more akin to the former president, yet Kerry carried the black vote in the primaries over Edwards by a margin of 2 to 1. The reason: in presidential elections the black vote is not based on person but on policy.

"It is a very, very cold, calculated pragmatic vote," Bositis said of African Americans. He suspects "the black turnout is going to be larger than it was even in 2000" and that the percentage of support for Kerry will likely surpass Gore's 90 percent, though he is skeptical it will approach what Lyndon Johnson received in 1964.

If the numbers show Kerry is doing well with black voters, why has all the news been skeptical? "The press is misinterpreting," Bositis answered. "Quite frankly, I found a lot of the stories silly."

Whether or not the criticism of the Massachusetts senator's appeal to African Americans is unsubstantiated, black voters clearly have Kerry's ear. On Wednesday, Kerry unveiled his first advertising campaign targeting the key Democratic voting bloc. But the $2-million advertising drive was met with derision by black congressional leaders.

"The ads were not gripping," Rep. Elijah Cummings, D-Md., chairman of the Congressional Black Caucus, told CBS News. "We need something to grip African American people." Cummings added that the "regressive agenda of Bush" needs to be more strongly attacked. The Kerry campaign intends to modify the campaign.

But the one-day row with congressional black leaders was not an aberration. Kerry has come under criticism for not having enough African Americans in senior advisory positions. Just as with the advertising campaign, Kerry immediately took action and hired ranking black staff members.

"The problem is connecting with black leaders on the ground," said Donna Brazile, an African American who was Gore's campaign manager in 2000. "[But Kerry's staff] have turned a corner and are well positioned to have a terrific turnout this fall."

And this week, when Kerry was criticized after all the prime-time speakers announced for the Democratic convention were white, Illinois Democratic Senate candidate Barack Obama was quickly named to deliver the keynote address.

Speaking to reporters Thursday, Kerry said of Obama, "I think he represents the future."