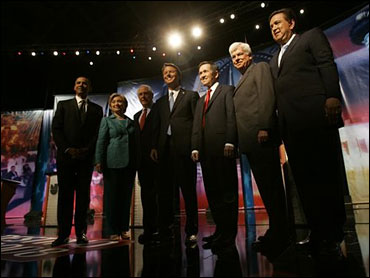 Democratic White House candidates embraced Hispanic concerns in the first ever Spanish-language presidential debate, unanimously promising to bring troops home from Iraq and to begin working on immigration in their first year in office.

On the eve of a war assessment by U.S. commanding Gen. David Petraeus, the presidential hopefuls said troops should begin coming home no matter what the report says. With the moderator of the debate noting that two-thirds of Hispanics want a withdrawal from Iraq, the candidates had an ideal audience to criticize the war.

"I'll strongly support in the coming days efforts here to terminate that participation based on firm deadlines," said Connecticut Sen. Chris Dodd in the debate, which was broadcast on Univision, the nation's largest Spanish-language network.

Anchors Jorge Ramos and Maria Elena Salinas posed questions in Spanish and the candidates had earpieces to hear simultaneous translations into English. The candidates' responses were simultaneously translated into Spanish for broadcast.

Former North Carolina Sen. John Edwards said he is concerned the Petraeus report "will be basically a sales job by the White House, that it'll be a PR document." He said Congress should use its power to fund the war to insist on a withdrawal timetable.

Hillary Rodham Clinton said nothing in the report will change the basic problem that there is no military solution in Iraq. "We need to quit refereeing their civil war and bring our troops home as soon as possible," she said.

New Mexico Gov. Bill Richardson retorted that Clinton and others who want to leave residual forces in Iraq would leave soldiers at risk.

"I'd bring them all home within six to eight months," Richardson said. "There is a basic difference between all of us here ... This is a fundamental issue."

Ohio Rep. Dennis Kucinich was loudly applauded for saying he would pull troops out of Iraq immediately. Illinois Sen. Barack Obama aligned himself with Kucinich.

"I was a strong opponent of the war, as Dennis was," Obama said, adding that President Bush is trying to make it appear that the 35,000 troop surge earlier this year has had an impact.

Not surprisingly for anchors who vocally support a path to legalization for the nation's estimated 12 million immigrants, both Ramos and Salinas framed their questions with the basic assumption that immigrants, including those in the country illegally, face discrimination and have been unfairly demonized - a view not universally shared in the English-language media.

All seven candidates said they would work on changing immigration laws during their first year in the White House.

Richardson, one of two candidates who speak fluent Spanish, objected to the debate rules that required all candidates to answer in English. The rule was designed to make sure that no candidate had an advantage in appealing to the Spanish-speaking audience.

"I'm disappointed today that 43 million Latinos in this country, for them not to hear one of their own speak Spanish, is unfortunate," Richardson said.

Dodd, who served in the Peace Corps in the Dominican Republic, also speaks Spanish fluently. He called for more U.S. engagement with Latin America, including a lifting of the trade embargo against Cuba.

Former Alaska Sen. Mike Gravel boasted that he's also bilingual - in French. "I honor everyone who comes to this country as an immigrant because we are all immigrants."

Kucinich was again an audience favorite when he said he would make Spanish a second national language. No other candidate was willing to go that far.

"I believe that the common language of our country is English," Dodd said.

The candidates were asked why they supported a wall along the Mexican border - and not a similar fence along the U.S.-Canadian border - a question that seemed to catch them somewhat off-guard. Most avoided answering directly, saying simply that they believed security was a key part of comprehensive immigration reform.

"I do favor more security on the border and in some cases a physical border because that has to be part of securing our borders," Clinton said.

Delaware Sen. Joe Biden, recently returned from a trip to Iraq, skipped the debate to prepare for a Foreign Relations Committee hearing that he is scheduled to chair Tuesday on the Petraeus report.