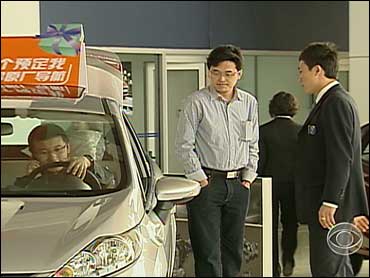 Think the wheels are coming off the global car business? Think again.

U.S. automakers sold about 858,000 new cars in March, according to market research firm Autodata - another dismal month for the Big Three, which saw North American sales drop nearly 40 percent from a year ago.

But General Motors says it sold a 137,000 cars and trucks in China in March, up nearly 25 percent from a year earlier and a new company record for the month, as CBS News correspondent Barry Petersen reports.

China sales are booming thanks in part to a government economic stimulus plan keeping showrooms hopping by paying out rebates for purchasing small cars.

And what's hot in this hot market?

"I love American cars for their performance," said one Chinese customer.

Turn on the TV and the market leaders are American. Both Ford and GM. build cars in China for China, and part of their success is what's in a name. In China, a Ford or Chevrolet is considered a high-end import.

"China is a face-oriented culture," said Bill Russo, an expert on the Chinese automobile market. "People buy an imported car in order to demonstrate an achievement of a particular social status."

And when is the last time you heard a GM executive say that "our factories are running flat out to meet that demand," as GM China president Kevin Wale recently did?

One key to success - designing cars just for this market, like a Buick model favored by Chinese executives and high-level bureaucrats.

"They tend to have a driver which means you have to put more attention to the rear seat passenger," Russo said. "The person who paid the money for that car is sitting in the back."

So the carmakers are making those back seats luxurious, with controls for air conditioning and stereo and lots of legroom for that back-seat VIP.

And the Chinese profits are sent back to Detroit, which means U.S. car companies are getting a badly needed boost back home from a country far away where customers still love to buy American.