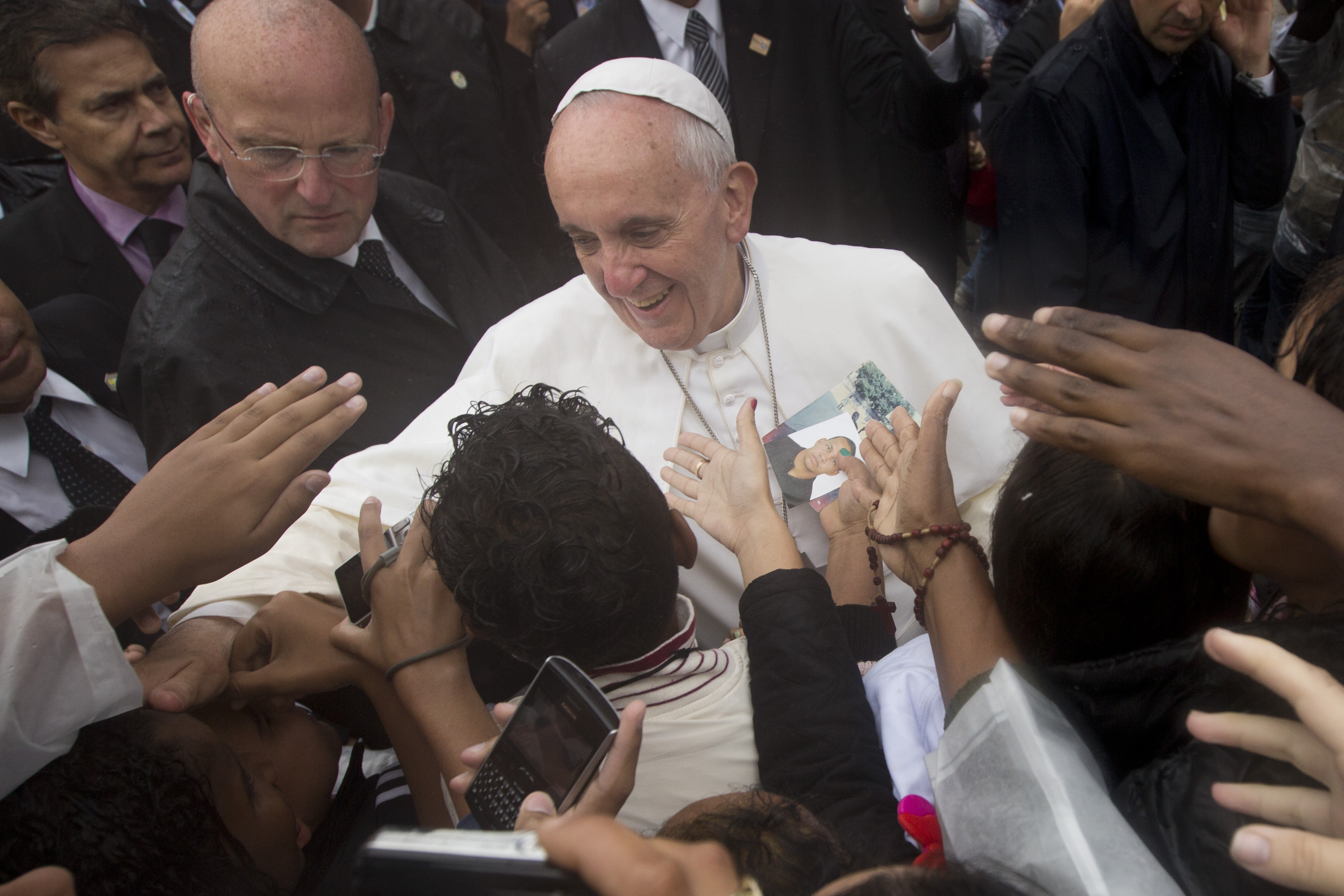 RIO DE JANEIRO The "slum pope" returned to the slum on Thursday as Pope Francis visited one of Rio de Janeiro's favelas, telling its residents that the wealthy must do more to end the "culture of selfishness" that has left the poor on the margins of society.

It was a clear reference to the violent protests that paralyzed parts of the country in recent weeks as Brazilians furious over rampant corruption and inefficiency within Brazil's political class took to the streets.

Francis received a rapturous welcome during his visit to Varghina, a neighborhood in northern Rio that's part of a super-violent region known by locals as the Gaza Strip.

Despite heavy security and a cold rain, Francis waded into the cheering crowds and hugged and kissed residents young and old before blessing the altar of the shoebox of a church that serves the community. He prayed before a replica of Brazil's patron saint, the Virgin of Aparecida, and met with a family in their squat yellow home.

"He gave each of us a rosary, he took photos with everyone and embraced each one," said Diego Rodrigues, a 26-year-old friend of the da Penha family who received the papal visit. "I think everyone but the pope was speechless!"

Francis brought a message of hope, following in the footsteps of Pope John Paul II who visited two such favelas during a 1980 trip to Brazil and Mother Teresa who visited Varginha itself in 1972. Her Missionaries of Charity order have kept a presence in the shantytown ever since.

Like Mother Teresa, Francis brought his own personal history to the visit: As archbishop of Buenos Aires, then-Cardinal Jorge Mario Bergoglio frequently preached in the poverty-wracked slums of his native city, putting into action his belief that the Catholic Church must go to the farthest peripheries to preach and not sit back and wait for the most marginalized to come to Sunday Mass.

In remarks to a crowd of several thousand Varghina residents, who slushed through a muddy soccer field to welcome him, Francis acknowledged that young people in particular have a sensitivity toward injustice.

"You are often disappointed by facts that speak of corruption on the part of people who put their own interests before the common good," Francis told the crowd. "To you and all, I repeat: Never yield to discouragement, do not lose trust, do not allow your hope to be extinguished. Situations can change, people can change."

He blasted what he said was the "culture of selfishness and individualism" in calling for greater efforts to fight hunger and poverty.

"No amount of peace-building will be able to last, nor will harmony and happiness be attained in a society that ignores, pushes to the margins or excludes a part of itself," Francis said.

He heard from resident Rangler dos Santos Irineu, who said that thanks to his visit, the favela was spruced up: Street lights were installed, the roads were paved and garbage collected.

"Everything that wasn't part of daily life for the residents has been done now, and we hope it will continue," he said.

It was one of the highlights of Francis' weeklong trip to Brazil, his first as pope and one seemingly tailor-made for the first pontiff from the Americas. Later Thursday, he was to preside over a welcoming ceremony on Copacabana Beach for World Youth Day, his first official event with the hundreds of thousands of young people who have flocked to a rain-soaked Rio for the Catholic youth festival.

He added a last-minute tweak to his busy schedule, meeting with pilgrims from his native Argentina at Rio's cathedral Thursday afternoon.

Francis' open-air car was mobbed on a few occasions as he headed into Varghina's streets lined with brick shacks, but he never seemed in danger. In fact he was showered with gifts as he walked down one of the slum's main drags without an umbrella to shield him from the constant rain. A well-wisher gave him a paper lei, or necklace, hung around his neck, and he held up a scarf from his favorite soccer team, Buenos Aires' San Lorenzo, that was offered to him.

"Events like this, with the pope and all the local media, get everyone so excited," said Antonieta de Souza Costa, a 56-year-old vendor and resident of Varginha. "I think this visit is going to bring people back to the Catholic Church."

In the last two decades, the church has lost legions of faithful in the country, most of them poorer Brazilians who have switched to Pentecostal evangelical congregations with a huge presence in Varginha and most other slums.

The Varginha slum butts up against what until about six months back was the largest "cracolandia" - crackland - in Brazil, where hundreds of crack cocaine users gathered under a train overpass and used the drug openly night and day. Crumbling brittle shacks still give the area a bombed-out feel.

However, the slum on Thursday was buzzing with excitement. Some 200 schoolchildren held blue-and-white balloons and construction-paper flags of yellow and green, Brazil's national colors. Every time a police helicopter buzzed overhead, the kids screamed with delight, their shrill high voices drowning out all other noises.

"I'm super-excited to see the pope. It's a once in a lifetime opportunity!" Antonio Sousa, a 28-year-old slum resident, shouted over the din of the crowd packing the street. Sousa held aloft a plastic statue of the Virgin Mary covered in plastic to protect it from the cold rain falling on Rio.

Security was tight: In addition to the police helicopters, sharpshooters perched atop buildings, metal barricades held the ecstatic crowd at bay on the street and police officers were posted every five feet (2 meters).

Varginha is one of the smallest of Rio's more than 1,000 slums, a triangle-shaped chunk of flat, dusty land sitting between two putrid waterways full of raw sewage. On the third side runs a busy main road with an elevated commuter train that noisily rolls by overhead.

The slum's surroundings somewhat ease security concerns, with the waterways acting as natural boundaries and only two roads 300 yards (meters) apart from one another allowing access.

Police invaded the slum in January and pushed out a heavily armed drug gang known as the Red Command, then set up a permanent police post in the area, which had seen virtually no government presence for decades.

The citywide pacification program started in 2008 to secure Rio de Janeiro before it hosts the 2014 World Cup soccer tournament and the 2016 Olympics.

There are now 33 permanent police posts set up in Rio in communities with 1.5 million people.

Francis started Thursday by receiving the keys to the city and blessing the Olympic flag, joining a long list of popes who have touted the positive role sport can play in society.

Francis also greeted some of Brazil's Olympic athletes during a brief visit to Rio's City Palace.

On the eve of the London Olympics, then-Pope Benedict XVI issued a message saying he hoped the 2012 Games would help promote peace and friendship. Pope John XXIII greeted Olympians in Rome for the 1960 Games.