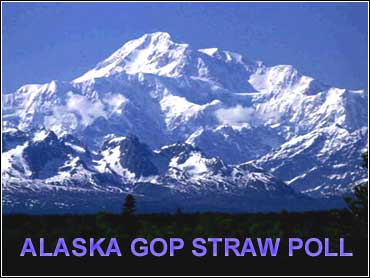 As in Iowa, the pecking order in Alaska's Republican straw poll was George W. Bush followed by Steve Forbes. But the margin of Texas Gov. Bush's victory here could be counted on one hand.

The Bush campaign said the governor was able to win despite being outspent by more than 10-to-1 by Forbes and facing a heavy advertising campaign from him in the final week. Forbes made several trips to Alaska while Bush settled for a phone call to the state and two mass mailings, with no state TV ads.

"One night, two victories," said Bush spokesman Ari Fleischer, "which means we're getting closer and closer to the end of the Clinton era."

Earlier Monday, in the Iowa caucuses, Bush collected 41 percent of the GOP votes, with Forbes second at 30 percent.

"After being so close in Iowa, we're walking on top of the world," said Don Devine, deputy campaign manager for Forbes, who flew in from Alexandria, Va., for the event. "It gives Steve the impetus going into New Hampshire that we need."

Registered Republicans gathered across Alaska to cast their votes in the non-binding straw poll. The party's official endorsement comes at the state convention this summer.