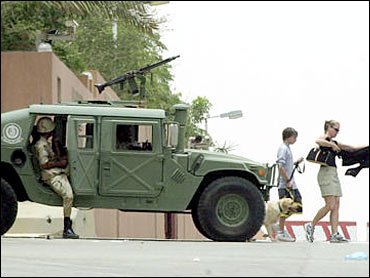 The United States and Saudi Arabia are both in the crosshairs of a resurgent al Qaeda threat, an adviser to the Saudi throne said Friday, as Western governments issued a slew of new terror warnings.

Adel al-Jubeir, foreign policy adviser to the Crown Prince Abdullah, told reporters Friday the Saudi government will undertake its own unilateral efforts to bring down al Qaeda and will share information with U.S. investigators "almost in real time."

"We're both in the crosshairs of this organization," al-Jubeir said. "We have never had as close, or as strong, a cooperative effort between our two countries as we have now."

However, the pace of the bombing investigation could be affected by a diplomatic dispute over precisely what security enhancements the United States sought for the housing compounds that were bombed when it became apparent a terrorist attack was imminent.

The State Department says it asked for better security at all compounds housing Westerners. The Saudis insist the request was made for only a single compound.

But al-Jubeir admitted, "On Monday, we failed. We will learn from this mistake, we will ensure it never happens again."

An American official in Saudi Arabia, who spoke on condition of anonymity, said intelligence "indicated that there was going to be a stream of attacks, and so we have confidence that has begun."

There were signs that the blasts had prompted stiffer measures. Saudi soldiers and armed guards set up new checkpoints, searched cars and quizzed drivers by the hundreds as security was tightened throughout the jittery capital of Riyadh.

The United States issued a specific alert to Americans in the city of Jeddah citing "an unconfirmed report that a possible terrorist attack…may occur in the near future." It was one of several terror alerts issued over a 24-hour period.

In Kenya, a wave of intelligence reports in recent weeks points to an attack on foreign embassies and residences of foreign officials, Western officials said.

Britain stopped flights there on Thursday, and the U.S. warned of "indications of terrorist threats in the region aimed at American and western interests, including civil aviation."

The British high commissioner to Kenya said the return of top al Qaeda suspect, Fazul Abdullah Mohammed, is another reason for canceling current flights. Mohammed is wanted in the 1998 U.S. embassy bombings.

Australia warned of potential threats in Afghanistan, Ethiopia, Kenya Saudi Arabia and Vietnam. New Zealand told its nationals that it was receiving hints of "further bombings or other forms of attacks are being planned against western interests" in Indonesia.

The battery of new warnings came amid a rash of apparent terrorist activity in addition to the bloodshed in Riyadh, although there was no evidence of any connection between the events.

Suicide bombers in Chechnya have killed more than 70 people in the past two weeks. There were 18 bomb attacks on gas stations in Karachi, Pakistan. And a group of European tourists was released after being held for days by an al Qaeda-linked group.

According to The Washington Post, al Qaeda may be staging attacks now to try to restore its image after more than a year of pounding by the U.S.-led "war on terrorism."

The group is being blamed for Monday's attacks in which gunmen shot and broke their way into three residential compounds used by Westerners, then detonated bombs.

Apart from the eight Americans, those killed in three attacks included 16 Saudis — nine of them among the attackers — three Filipinos, two Jordanians, and one each from Australia, Britain, Ireland, Lebanon and Switzerland, according to the Interior Ministry.

If the attack was orchestrated by al Qaeda, Osama bin Laden would probably have played a role in its planning. CBS News National Security Correspondent David Martin reports U.S. analysts believe bin Laden is alive, and that he approves all major attacks, so he likely had knowledge of the Riyadh action.

Bin Laden's whereabouts have been unclear since the U.S. cornered him in the Tora Bora mountains of Afghanistan in December 2001.

Myers said it appears that bin Laden and his top lieutenants are "in areas where they can bribe the (people) that are inclined to support them and protect them, and they are in very difficult areas on this Earth."

Rumsfeld said finding one man was difficult, and out some blame on countries that allegedly give sanctuary to terrorists, like Iran.

Iran on Friday denied that it shelters members of al Qaeda terror network.