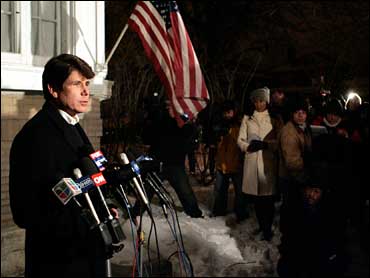 Illinois Gov. Rod Blagojevich has been convicted at his impeachment trial and thrown out of office.

The vote in the Illinois Senate to convict him of abuse of power was 59-0. In a separate vote, lawmakers voted 59-0 to to bar Blagojevich from ever holding public office in Illinois.

Democratic Lt. Gov. Patrick Quinn automatically becomes the new governor. He took the oath of office moments after the vote to remove Blagojevich.

Quinn is a 60-year-old former state treasurer and tax attorney. He is best known for his efforts to cut big government and protect the little guy. One of the most pressing issues for him is the state's deficit of more than $3 billion. (Read more about the new governor.)

Before Blagojevich, no Illinois governor has been impeached, let alone convicted in a Senate trial.

Blagojevich's removal comes nearly two months after his arrest on charges of trying to sell Barack Obama's vacant Senate seat. He becomes the first U.S. governor in more than 20 years to be removed by impeachment.

After returning to his home in Chicago, Blagojevich addressed a group of reporters saying he was "disappointed but not surprised" by the senate's action.

He vowed to, "keep fighting to clear my name," and added: "Give me a chance to show you that I haven't let you down."

"I love the people of Illinois today more than I ever have before," he said. And in a joking reference to Chicago's history of crooked politics, he reached down to a boy in the crowd of well-wishers and said: "I love you, man. You know, this is Chicago. You can vote for me. You're old enough."

Blagojevich defended his record, saying he provided healthcare and services to Illinois citizens without raising taxes.

He blamed the impeachment on political maneuvering and said he looks forward to clearing his name when he appears in federal court - likely sometime this spring.

Obama released a brief, written statement late Thursday. It read: "Today ends a painful episode for Illinois. For months, the state had been crippled by a crisis of leadership. Now that cloud has lifted. I wish Governor Quinn the best and pledge my full cooperation as he undertakes his new responsibilities."

Earlier Thursday, Blagojevich insisted that he had done nothing wrong and should not be removed from office over unproven criminal charges and complaints about his management decisions.

"You haven't proved a crime, and you can't because it didn't happen," Blagojevich told senators. "How can you throw a governor out of office with insufficient and incomplete evidence?"

Later he pleaded, "How can you throw a governor out of office who is clamoring and begging and pleading with you to give me a chance?"

"He was calm, he was organized and he was a lot less feisty and argumentative than he had been earlier in the week on all those talk shows," said CBS News Legal Analyst Andrew Cohen. "His appeal was simple: I may be a rough and tumble governor who likes to cut through red tape, who pushes too hard, but my motives were always good and my conduct was always legal. That's a tough sell in politics or law."

Only a small part of Blagojevich's defense was dedicated to a point-by-point rebuttal of the impeachment charges. Most of his remarks focused on reminding senators that he came from humble beginnings. He said his intentions were always good, and he peppered his statement with anecdotes about struggling constituents he has met.

He acknowledged the truth about his conduct is "maybe not flattering in some cases," referring to the secretly recorded conversations. But he said the tapes captured something that "all of us in politics do in order to run campaigns and win elections." 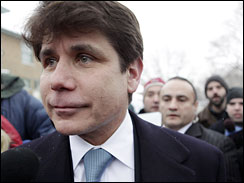 (AP)
"...we clearly saw a preview of the defense he'll offer in federal court if and when he is indicted on those bribery and corruption charges that led to his impeachment," said Cohen. "He's going to say the evidence is weak, that what he did is what politicians do, and that he had no criminal intent during all those alleged pay for play phone calls."

Blagojevich arrived at the state Capitol while impeachment prosecutor David Ellis delivered his own closing argument, which included some of the secretly recorded conversations.

"Every decision this governor made was based on one of three criteria: his legal situation, his personal situation and his political situation," Ellis told lawmakers.

Today's verdict brought to an end what one lawmaker branded "the freak show" in Illinois. Over the past few weeks, Blagojevich found himself isolated, with almost the entire political establishment lined up against him. The furor paralyzed state government and made Blagojevich and his helmet of lush, dark hair a punchline from coast to coast.

One lawmaker after another rose somberly on the Senate floor to accuse Blagojevich of abusing his office and embarrassing the state. They denounced him as a hypocrite, saying he cynically tried to enrich himself and then posed as the brave protector of the poor and "wrapped himself in the constitution" by decrying the impeachment process as unfair.

Not a single legislator rose in Blagojevich's defense. 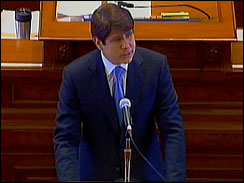 (CBS)
The verdict capped a head-spinning string of developments that began less than two months ago. It was widely known that federal prosecutors had been investigating Blagojevich's administration for years - some of his closest cronies have already been convicted - but his Dec. 9 arrest by the FBI caught nearly everyone off guard.

U.S. Attorney Patrick Fitzgerald said prosecutors had no choice but to step in and stop a political corruption "crime spree" - one that was gaining speed before a tough new campaign finance law took effect Jan. 1.

The most spectacular allegation was that Blagojevich had been caught on wiretaps scheming to sell an appointment to Obama's Senate seat for campaign cash or a plum job for himself or his wife.

Prosecutors also said he illegally pressured people to make campaign contributions and tried to get editorial writers fired from the Chicago Tribune for badmouthing him in print.

Obama himself, fresh from his historic election victory, was forced to look into the matter and issued a report concluding that no one in his inner circle had done anything wrong.

Even as lawmakers were deciding whether to launch an impeachment, Blagojevich defied the political establishment and stunned everyone by appointing a former Illinois attorney general, Roland Burris, to the very Senate seat he had been accused of trying to sell. Top Democrats on Capitol Hill eventually backed down and seated Burris.

Seven other U.S. governors have been removed by impeachment, the most recent being Arizona's Evan Mecham, who was driven from office in 1988 for trying to thwart an investigation into a death threat allegedly made by an aide.

Blagojevich grew up in a working-class Chicago neighborhood, the son of a Serbian immigrant steelworker. He graduated from Northwestern University and earned a law degree from Pepperdine University in California.

Schooled in the bare-knuckle, backroom politics of the infamous Chicago Machine, he got elected to the Illinois House in 1992 and Congress in 1996.

In 2002, he was elected governor on a promise to clean up state government after former GOP Gov. George Ryan, who is serving six years in prison for graft.