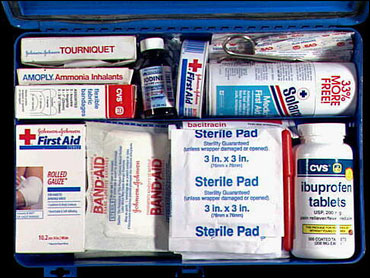 Almost everyone has been faced with a medical emergency.

And the first aid measures you take at the scene -- even before you call 911 or head to the emergency room -- could make all the difference.

On The Early Show Wednesday, medical correspondent Dr. Emily Senay looked at common first aid mistakes. Her do's and don'ts may surprise you.

YOUR CHILD SWALLOWS SOMETHING YOU THINK MAY BE POISONOUS

For years, we were told to use syrup of ipecac, to induce vomiting. That's wrong. The American Academy of Pediatrics and other experts no longer recommend using it. They say there's no evidence that vomiting helps children who have swallowed something poisonous. Most emergency medical facilities have switched to activated charcoal, which binds with the poison in the stomach and prevents it from entering the bloodstream.

So, you should throw out any syrup of ipecac you may have. If a poisoning occurs, immediately call your doctor or poison control center and bring the container of whatever the child ingested to the ER.

A lot of people think you treat burns with butter or ice. That's wrong. According to the Mayo Clinic, butter can prevent proper healing and ice can cause frostbite, damaging skin. You also don't want to cover a burn. In addition, if a burn is serious enough to cause blisters, be careful to avoid breaking or puncturing them. Broken blisters leave you vulnerable to infection.

What you SHOULD do is wash the area with cool water and apply antibiotic ointment to mild burns. For burns around sensitive areas such as the eyes or mouth, or any burn that covers an area larger than your hand, see a doctor.

A TOOTH GETS KNOCKED OUT

According to the American Dental Association, you should quickly pick up the tooth -- by the crown only (the chewing edge) -- and immerse it in whole milk. Yes, that's right -- milk, and go as fast as you can to the dentist or the emergency room. The faster you get there the better the chances the tooth can be successfully re-implanted in your mouth.

If you have occasional nosebleeds, you should know NOT to lean back. And after the bleeding has stopped, do not blow your nose or bend over for several hours.

What you SHOULD do is sit upright and lean forward and pinch your nose just below the nasal bone for 5 to 10 minutes. But if the bleeding persists for more than 20 minutes, get medical attention.