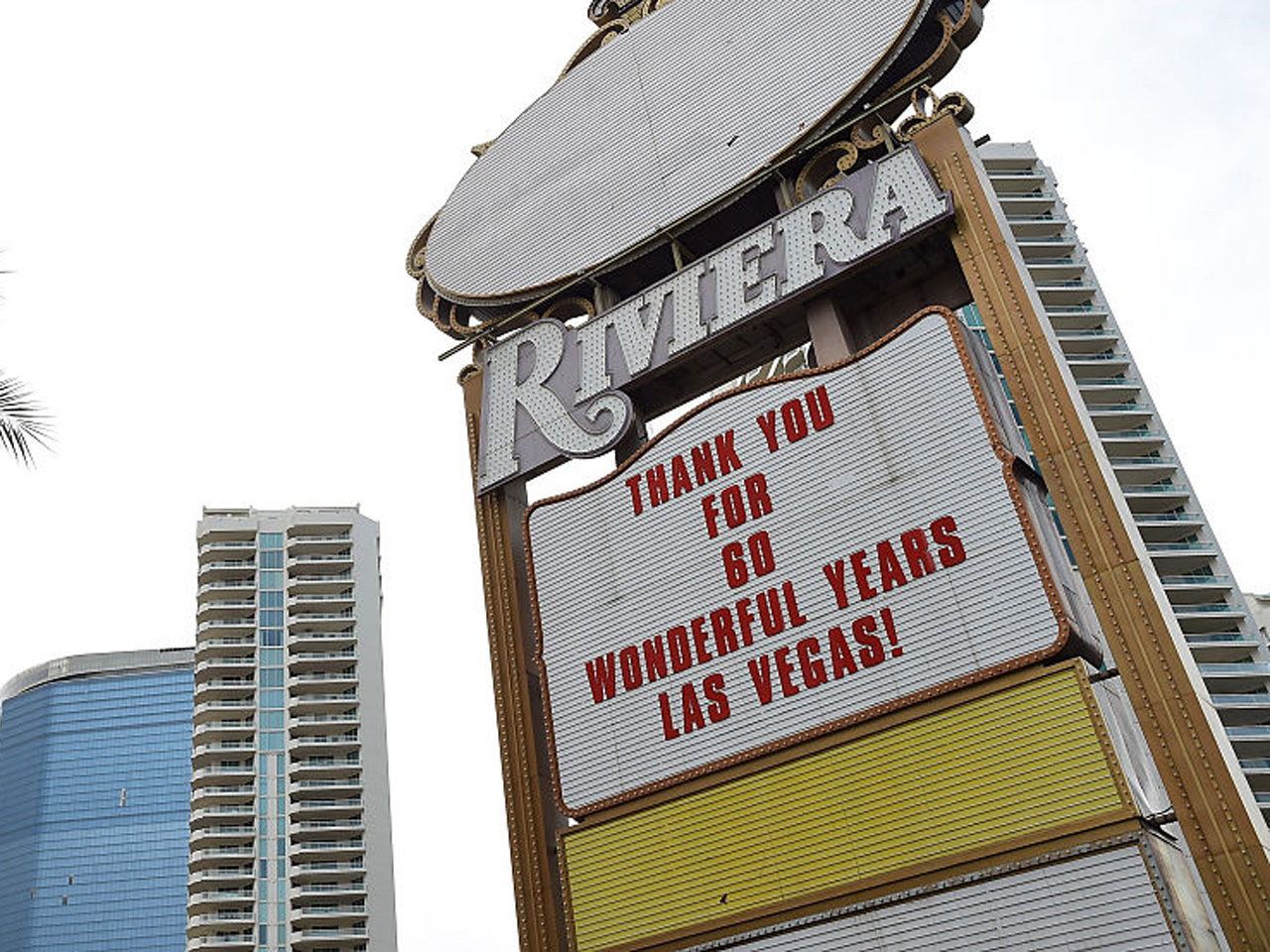 LAS VEGAS - The Riviera Hotel and Casino - the Las Vegas Strip's first high-rise that was as famous for its mobster ties as its Hollywood personification of Sin City's mobster past - officially exited the scene early Tuesday with a cinematic implosion, complete with fireworks.

The 24-story Monaco Tower was demolished around 2:30 a.m. when a series of explosions sounded, followed by the building crumbling from the sides and then into the middle, kicking up a mountain of dust.

A fireworks display erupted moments before the demolition.

"The Riv" closed in May 2015 after 60 years on the northern end of the Strip. The shuttered casino's owners, the Las Vegas Convention and Visitors Authority, spent $42 million to level the 13-building campus.

Officials said the Monte Carlo Tower will be imploded in August. The tourism agency bought the 2,075-room property across 26 acres last year for $182.5 million, plus $8.5 million in related transaction costs, with plans to expand its Las Vegas Convention Center.

The Riviera's implosion marks the latest kiss goodbye to what's left among the relics to Vegas' mobster past.

"Ironically, the Riviera is as famous for its imaginary self as much as its actual self," said Geoff Schumacher of the National Museum of Organized Crime and Law Enforcement, also known as the Mob Museum in Las Vegas.

Most of its contemporaries have been long gone, with only the Tropicana and Flamingo casinos still in business. The Flamingo has been completely rebuilt at its original location, but the Tropicana still has pieces of its original building, making it the last true mob structure on the Strip, said Michael Green, Nevada historian and a professor at the University of Nevada, Las Vegas.

It was the first high-rise hotel on the Las Vegas Strip but within months of opening, it was drowning financially, so some "wise guys" and a "flamboyant" showman stepped in to help.

"It was sharp, mob-connected guys who got it back on its feet. It opened with Liberace in the showroom getting $50,000 a week which people thought was just outlandish. Nobody's ever going to be paid that amount of money," Green told CBS affiliate KLAS.

When The Riviera opened in 1955, organized crime outfits from across the country had already sunk their teeth into the casinos in a takeover that had started the decade before. Gambling profits were skimmed to send back home to pay for their gangs' illegal enterprises involving illegal betting, drugs, prostitution, murders and everything else. The mobsters were known to have controlled the money-counting at the most famous casinos in their day, including the Dunes, Sands, Desert Inn and Stardust - all of which have already disappeared from the Strip.

"The Riviera was and always was the Chicago outfit's crown jewel in the desert," Schumacher said.

A classic mob joint, the Riviera's place in that seedy time is probably outranked by the Flamingo, historians said. That casino was run by Bugsy Siegel, who is regarded as the most historically significant figure from that era.

The casinos were cleaned up in the 1970s and 1980s, courtesy of state and federal crackdowns on organized crime.

Hollywood's version of the past, however, would hoist the Riviera to the top.

Three of the most famous movies ever filmed in Las Vegas used the Riviera as a backdrop, including the Rat Pack's original 1960 "Ocean's 11," the 1971 James Bond film "Diamonds Are Forever" and "Casino," the 1995 movie based on real-life Vegas mobsters Frank Rosenthal and Anthony Spilotro during their 1970s heyday at the Stardust. More recently, it was featured in "The Hangover" in 2009.

The Riviera also pioneered the business model that helped Vegas turn into an entertainment capital. The casino's first headliner was Liberace. Dean Martin was a part-owner for a short time as part of his exclusive residency.

"(The Riviera) looked like a 50s Rat Pack casino up until yesterday," Schumacher said.