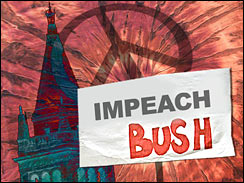 The left-leaning city of Berkeley will let voters decide whether to call for the impeachment of President Bush and Vice President Dick Cheney.

The City Council voted Tuesday night to put the advisory measure on the Nov. 7 ballot. The move is symbolic because only Congress has impeachment powers.

Some cities, including San Francisco and Oakland, have passed resolutions calling for impeachment, but supporters say Berkeley would be the first city asking voters to decide.

Only 5 percent of Berkeley voters are registered Republicans, and Democrat John Kerry received more than 85 percent of the city's vote in 2004.

The measure says the administration violated the Constitution with illegal domestic spying, justified the Iraq war with fraudulent claims and illegally tortured citizens.

"The whole idea is to start a grass fire surging up on this issue," Councilwoman Dona Spring said. "We hope other cities put this on the ballot as well. Just in the Bay Area we could get 2 or 3 million votes, which would be a very powerful statement."

Republican Party spokesman Tucker Bounds said the vote was of little consequence and no surprise.

"This is concrete evidence that liberal Berkeley is completely out of step with mainstream America," he said.