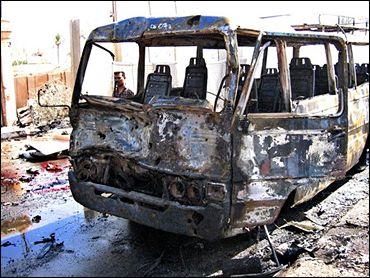 The United States so far has escaped the kinds of suicide bombings that have plagued countries across the Middle East, leaving senior U.S. officials with plenty of theories why — but no concrete evidence.

Or, "Maybe we are just lucky," Ridge says.

Experts inside and outside the government have warned that an attack on U.S. soil by individual suicide attackers using truck or car bombs or explosive vests may be inevitable. And many agree it is among the most difficult of attacks to prevent.

As the government's most senior leaders warn that credible information suggests terrorists are plotting an attack soon — before the November elections — counterterrorism officials continue to analyze the seriousness of such a threat.

Publicly, officials have not been able to narrow down what type of attack may be coming.

The United States has suffered a suicide attack before, of course — the devastating Sept. 11, 2001, hijacking hits.

But so far it has not seen the kind of individual suicide bombings that have become almost commonplace in parts of Iraq, Israel and elsewhere. There, experts say, a deep sense of revenge and victimization — coupled with extremist interpretations of Islam promising a special place in heaven for martyrs — pushes a tiny fraction to act.

Suicide terrorism has its greatest effect when done in a sustained and systematic way to unnerve a society and change the way it operates — as in Israel, said Bruce Hoffman, a terrorism expert at the RAND Corp. research group in Washington.

Strictly guessing, he said, it may simply be that terrorist groups don't have the numbers to do suicide bombings in the United States.

"It may be all these measures we've taken — to control immigration, to keep a better handle on people coming in out of the country — have dissuaded them from embarking on that kind of campaign," he said.

But, he warns, "I wouldn't completely rule it out."

Nor has the FBI.

Among cautions issued in a bulletin before the Fourth of July, the FBI asked authorities to be on the lookout for suicide bombers, who may wear irregular, loose-fitting clothing not appropriate for warm weather, possibly with "protruding bulges or exposed wires" or a noticeable chemical odor.

They may be sweating, mumbling prayers or displaying an unusually calm and detached behavior, the advisory said. It also warned authorities to watch for people in disguises — including military, police, medical or firefighter uniforms — or someone posing as a pregnant woman.

And, the FBI suggested looking out for large or heavy baggage not appropriate for a location, such as a big duffel bag carried into a restaurant.

In Europe, countries like Spain that are on alert for terror attacks have added patrols to subways and increased camera surveillance. The British government also has used millions of public and private surveillance cameras, a vestige of Irish Republican Army bombings.

Still, almost nothing can be done to stop a determined suicide attacker, most officials agree.

They differ, however, on just how tough it is to pull off such an attack. Information on bombs is widely available, some point out.

But U.S. officials also point to what's known about militant groups, including Hamas, to contend that recruiting bombers and giving them the tools for an attack takes more resources than is commonly believed.

"Do not fall victim to the narcotic that a suicide bomb costs pennies," David Aufhauser, then a Treasury Department official, told a House committee last fall.

"Hamas receives tens of millions of dollars a year to underwrite its political agenda" and much of that is diverted to make bombs, plan teen centers and "advertise or boast of the killing," he said.

U.S. officials believe there are production lines that essentially attract young people to the cause of martyrdom, preying on psychological factors like family, victimization, humiliation and desires for revenge, says J. Cofer Black, who heads the State Department's counterterrorism office.

Black sees a failure by moderate Muslim leaders to stop the root causes of such attacks — by clearly stating what is right and what is wrong.

"It is quite a trick, I think, to take a young person — and now it's even turned to young women who are prepared to leave their young children to become suicide attackers," he said.