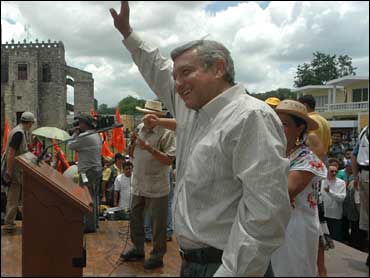 This story was written by CBS News Producer Alfonso Serrano.


As Mexican presidential candidates race neck and neck towards a fast-approaching election day, Mexico's thorny relationship with the United States regarding immigration has emerged as a standout issue and could prove to be decisive in the July 2 vote.

Leading candidates — leftist Andres Manuel Lopez Obrador of the Party of the Democratic Revolution (PRD) and Felipe Calderon of the ruling National Action Party (PAN) — have stressed domestic topics during their campaigns. But U.S. President George Bush's decision to send 6,000 National Guard troops to the border and the subsequent surge in anti-Americanism could propel Lopez Obrador to victory.

After linking Lopez Obrador to Venezuela's firebrand leader Hugo Chavez, Calderon had surged ahead to a double-digit lead in polls. But Lopez Obrador may have received an unintended gift from the United States when President Bush decided to secure the U.S.-Mexico border with National Guard troops.

Lopez Obrador immediately pounced on Mexican President Vicente Fox for not standing up to the United States. While on the campaign trail in Sinaloa, Lopez Obrador accused Fox losing the immigration battle with the United States because he is too busy promoting Calderon's campaign. He added that Fox is a "puppet" of the U.S. government.

"The border issue could give Lopez Obrador election victory," said Jorge Capetillo, a Latin America expert and professor at the University of Massachusetts. "It has definitely helped him."

While the Iraq war and the alleged mistreatment of prisoners at Guantanamo Bay have recently fueled anti-Americanism worldwide, large sectors of Mexican society have regarded the United States with hostility for well over a century. Until the late 1980s, when former Mexican President Carlos Salinas de Gortari ruled Mexico, high school history lessons began with stories of the United States "robbing" Mexican territory.

Today, history books present the loss of former Mexican territory to the United States in a more neutral way. But anti-Americanism remains an integral part of Mexican nationalism. In poll after poll in the region, Mexico is consistently at the top of list of countries that most disapprove of U.S. policy.

"There has always been a strong anti-American sentiment in Mexican popular culture," said Pablo Cabañas, a political science professor at the National Autonomous University of Mexico in Mexico City. "This sentiment is especially strong among the lower classes."

While Salinas de Gortari was the first modern Mexican president to openly bill himself as pro-American, it is President Fox who has most closely aligned himself with a U.S. administration, while receiving so little in return. Fox, who is barred by the constitution from seeking a second term, was the first foreign leader to make a state visit to the Bush White House. And in the early days of the Bush presidency, both leaders declared themselves compadres and expressed a shared vision to mend immigration policy.

But the wars in Iraq and Afghanistan, and domestic pressure to secure U.S. borders from potential terrorists, have altered the Bush administration's approach towards its southern neighbor. In addition to calling National Guard into action, Mr. Bush announced last month that it "makes sense" to construct a 370-mile long fence along key stretches of the border (a separate House bill proposes a 700-mile long border wall).

The United States Congress is unlikely to decide on the construction of a border wall before July 2 elections. But Mr. Bush's border moves have undoubtedly hampered Fox and could spell trouble for Calderon, his chosen successor, nonetheless.

"Fox has been the most pro-American president in the history of Mexico and that hasn't resulted in anything," said Capetillo. "Many Mexicans see the border issue as anti-Mexican. They are asking themselves, 'Why have we gotten closer to the U.S. if they are going to build a border wall?' "