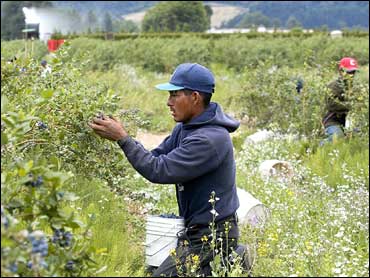 Many in Mexico expressed disappointment Friday with the U.S. Congress' immigration reform proposal, arguing it doesn't let enough Mexicans enter the United States legally to work while focusing on an arduous path to residency for those who have already taken the illegal path.

Mexican news media and activists attacked what they viewed as a measure to limit the number of seasonal workers allowed into the United States — even as the compromise's proponents said it would let in many more.

Migrants as well as U.S. employers who need workers for low-skilled jobs had hoped Congress would streamline and vastly expand the existing guest worker program, allowing more people to cross legally, work a few months, then return home with their savings to build homes and businesses.

The new proposal did include a new guest worker program, but it appeared to limit the number of times workers could renew the temporary visas.

At the U.S. Consulate in Monterrey, which hands out more temporary work visas than anywhere else in the world, Edmundo Bermudez, a 36-year-old from the northern city of Durango, was especially offended by reports that preference would be given to migrants with degrees and specialized skills.

"The United States already has enough people with college degrees. Who is going to cut their tobacco?" asked Bermudez, who has been working intermittently in the U.S. for the past eight years. In Mexico, he makes about $10 a day, while in the U.S. he earns $8 an hour.

The proposal, unveiled Thursday in Washington, focuses on securing the border and giving illegal residents a long, and, many argue, expensive path toward legal residency. Undocumented immigrants could seek lawful permanent residence once they pay $5,000 in fees and fines and their head of household returns to their home country.

It would also create a new temporary guest worker program that would hand out two-year "Y visas." Workers would be able to renew those visas up to three times, returning to Mexico for a year in between each stint. That apparently would be in addition to the current H2 program that lets migrants work part of the year in seasonal jobs.

Many in Mexico worry about the restrictions the new program could contain. Under the current guest worker program, many workers, like Bermudez, spend most of their adult life working part of each year in the U.S.

Mexican newspaper and television news broadcasts led with news of the proposal Friday, with El Universal newspaper headlines reading: "Immigration reform divides the United States" and "Latinos: It isn't what we hoped for."

Gilberto Escalante, a 41-year-old fisherman from Topolobampo in Sinaloa state, said the current guest worker program is better than the congressional plan because it gives Mexicans the option to freely enter and leave the U.S. while maintaining their lives in Mexico — instead of forcing them to choose between the two countries.

"We don't want the house or the latest car in the U.S. We want to go and work so that our families can have a good life in Mexico," said Escalante, who came to the industrial hub of Monterrey to apply for a visa to work on fish and shrimp boats off the coast of Mississippi.

Yet the congressional plan came as welcome news to the millions of Mexicans who depend on the $23 billion sent home each year by Mexicans living in the U.S., many illegally.

The proposal would allow illegal immigrants to obtain a "Z visa" and ultimately get on track for permanent residency, which could take between eight and 13 years. Heads of households would have to return to their home countries first.

It is also good news for the Mexican government, which has spent years lobbying the U.S. for a comprehensive immigration reform that allows more people to work legally in the U.S. Many had feared the U.S. would only approve more border security measures, such as adding to National Guard troops at the border and other high-tech security measures.

"The Mexican government hopes that the different actors involved in the debate and eventual approval of this initiative take advantage of the opportunity it presents," he said in a statement.

Miguel Garcia, 35, of Maravatio in the western Mexican state of Michoacan, said he was glad that the U.S. was giving illegal migrants a chance at fixing their status.

"They shouldn't punish people who are just trying to get ahead," he said.

A United Nations human rights expert urged the United States on Friday to enforce polices to protect the rights of migrants, as he wrapped up a nearly three-week U.S. tour focusing on the plight of migrants.

Jorge Bustamante, the U.N. Human Rights Council's independent expert on migrant rights, expressed concern that the United States has no central system for families to get information about loved ones arrested by immigration officials.

Bustamante, who is from Mexico, also said he was disappointed that U.S. officials canceled his planned visits to two detention centers. Although he visited another detention center, he said the cancellations were an obstacle to getting his job done.

"I didn't have any explanation," he told reporters of the cancellations.

Bustamante is expected to formally present his findings to the U.N. rights council in June.

During his 18-day visit, he toured the U.S. border with Mexico and watched U.S. immigration officials at work. He met with migrants and rights groups in several states and with U.S. officials from the Department of Homeland Security, the Immigration and Customs Enforcement Agency and the State Department.