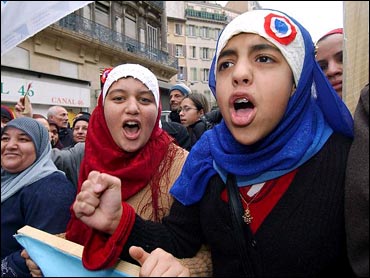 People in some of the world's leading industrial nations say immigrants mostly take jobs that citizens of their own countries do not want, yet they still say immigrants are a bad overall influence, Associated Press polls found.

In the United States and in the European countries polled - Britain, France, Germany, Italy and Spain - people were more likely to say they had negative views of the influence of immigrants, according to the AP-Ipsos polls. That comes at a time of high concern over unemployment and jobs and worries about terrorism.

The recent expansion of the European Union has raised fears among longtime EU members of a wave of immigration. Many of those countries have announced plans to limit access for newcomers to their labor markets.

Gilles Corman, who monitors European public opinion for Ipsos, says immigration is among the top issues Europeans want dealt with in elections there, behind unemployment.

In one country after another, those with more education tended to have the most positive view of the influence of immigration.

Britons expressed the strongest negative feelings of any of the nine countries polled. Six in 10 Britons, 60 percent, said immigrants are a bad influence on their country.

"The U.K. has historically embraced diversity," said Sam McGuire, with Ipsos-UK. He said the high negative ratings may have to do with Britons' fears about the recent expansion of the European Union, fanned by stories predicting a flood of immigrants.

Another country where residents said they had a fairly negative view of immigration was Germany, where almost six in 10, 57 percent, said immigrants have been a bad influence.

And while a solid majority of residents of most countries surveyed said it's better for a country to have a variety of religions, more than four of 10 Germans disagreed with that.

Germans' negative feelings about immigration could be related to fears about security and terrorism after one of the Sept. 11 terrorists abused Germany's immigration rules, said Christian Holst, director of public affairs for Ipsos-Germany. Germans worry more than those in some other countries that immigrants could take jobs, which could be driven by Germany's relatively high unemployment rate, Holst said.

Many countries share the experience of Spain, where an influx of immigrants provides laborers to work in olive and fruit groves, at construction sites and in greenhouses. Many sectors of the Spanish economy are in constant need of unskilled, cheap labor. The same could be said of many of the industrial countries.

While people in the United States, Canada, the European Union and Japan generally said immigration provides a work force that takes unwanted jobs, almost half of Mexicans, whose country has less industrial development than others polled, said they see immigrants as a threat to their own work force.

"In spite of so many Mexicans migrating to the United States, Mexicans have a harsh view on immigration in general," said Jorge Buendia of Ipsos-Bimsa in Mexico.

A large majority of Mexicans, 71 percent, said they think it's better if almost everyone in a country shares the same customs and traditions.

Residents of the United States disagreed with that sentiment by a 3-1 margin, and the Japanese tended to disagree by a smaller margin. In European countries polled, people were generally divided on that, although a slight majority in France and Spain agreed.

In France, just over half those polled, 53 percent, said immigrants have been a negative influence. The French are anxious about a growing Muslim population, now estimated at about 5 million, many of whom are citizens. The government worries over a rise in fundamentalist Muslim practices and a decision by some Muslims not to adapt fully to French customs. An example is a new law that bans head scarves in French public schools starting in September.

Just over half in France, 52 percent, say it's better if almost everyone in a country shares the same customs and traditions.

The AP-Ipsos polls of about 1,000 residents of Britain, Canada, France, Germany, Italy, Japan, Mexico, Spain and the United States were conducted from May 7-17 and have a margin of sampling error of plus or minus 3 percentage points in each country.