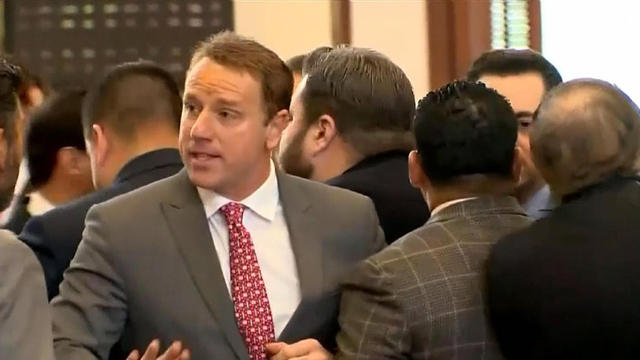 AUSTIN, Texas -- A Hispanic Texas lawmaker who a Republican colleague threatened to shoot "in self-defense" after the Democrat pushed him said Tuesday that the altercation was a boiling point in a session where minority members were powerless to stop conservative legislation they say is discriminatory.

Tensions erupted on the floor of the Texas House of Representative on Monday when Republican state Rep. Matt Rinaldi told Democrats he called U.S. Immigration and Customs Enforcement (ICE) agents about demonstrators in the gallery holding signs that read "I am illegal and here to stay."

San Antonio Rep. Philip Cortez told CBS affiliate KEYE that he was one of three Hispanic lawmakers approached by Rinaldi. Cortez said Rinaldi intentionally antagonized them by saying that he called ICE on "illegal immigrants" in the gallery protesting the new "anti-sanctuary cities" law.

"He wanted a fight, he got a fight," Cortez told KEYE. "That's not acceptable. We won't be intimidated and we won't be disrespected."

The Department of Public Safety is investigating a "scuffle" between lawmakers on the House floor Monday, KEYE reports.

Hundreds of immigrant-rights activists - many of whom were Hispanic - had jammed the state Capitol on the final day before the Texas Legislature adjourned. Some came from as far as Arizona to protest a "sanctuary city" crackdown that will allow police starting September to ask people during routine stops whether they're in the U.S. legally.

Democratic state Rep. Poncho Nevarez did not deny pushing Rinaldi, who wrote on Facebook that he told Nevarez after being threatened that "I would shoot him in self-defense." Nevarez said he was "sick of" the attitudes toward Hispanics in the Legislature and was taking a stand.

"Another legislator sidled up to me yesterday and said, 'Those aren't Americans up there.'" said Nevarez, referring to the protesters in the gallery.

"I think there are some people in some moments that bring out racism. They want to believe that they're not racist because when they deal with me I'm one of the 'good' ones. But I'm just one of the folks up there," he said of the protesters.

A phone message left at Rinaldi's office was not returned Tuesday but GOP colleagues rebuked accusations of racism. On Facebook, Rinaldi admitted that he called ICE (a claim ICE itself disputes), but claims he was assaulted afterward and that his life was threatened, KEYE reports.

But, according to KEYE, Democrats say that never happened.

"I think yesterday was the symptom of what's been a difficult, challenging and emotional session. No one has totally clean hands but what happened on the floor with the physical attack on Matt was beyond the pale," Republican state Rep. Jeff Leach said.

Republican Gov. Greg Abbott, who signed the "sanctuary ban" known as SB4 this month, has stayed quiet over the skirmish and a spokesman did not return messages Tuesday. Nevarez said he wanted Abbott to come out and publicly say that Rinaldi calling immigration authorities was wrong.

A Democrat hasn't won a statewide office since 1994 - the nation's longest such political losing streak - frustrating a party that has seen the state's Hispanic population boom but hasn't had its electoral fortunes change. About 43 percent of Texas residents are white, while whites make up the majority of legislators.

The tensions flared at the end of the divisive session in Texas in which race was invoked in debates over immigration, voting rights, border security and policing. Among the bills sent to Abbott's desk are changes to a voter ID law that a federal judge has ruled was intentionally discriminatory. Another was the "Sandra Bland Act," named for a black woman who died in a Texas jail in 2015 following a confrontational traffic stop with a white state trooper. Bland's family were disappointed after police accountability measures were removed.

Democrat state Rep. Helen Giddings, who was first elected in 1992 and heads Texas' black legislative caucus, blamed politics, not race, for the tone of the session.