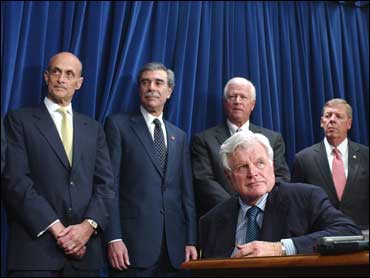 The job of patrolling the U.S. border for illegal immigrants is an unrelenting and difficult job. The job of Congressional proponents for immigration reform to sell their new plan is proving to be just as difficult.

A bipartisan immigration deal that would grant legal status to millions of people in the country unlawfully is drawing criticism from across the political spectrum.

The bargain reached between key Democratic and Republican senators and the White House faces an uncertain future in the Senate, which is set to begin debating it Monday.

As CBS News correspondent Sharyl Attkisson reports, the deal is a big, first step but it is only a first step. The small team of negotiators will now try to sell their plan to the rest of Congress.

"I don't know if the immigration legislation is going to bear fruit and we're going to be able to pass it," said Senate Majority Leader Harry Reid, D-Nev., who harbored "serious concerns" about the deal.

Even if it were to survive what's certain to be a searing Senate battle, the measure would be up against long odds in the House. Speaker Nancy Pelosi, D-Calif., acknowledging deep divisions on immigration among Democrats, says she won't bring it up unless President Bush can guarantee he will produce 70 Republican backers — a tall order given GOP concerns that the bill is too lenient.

Homeland Security Secretary Michael Chertoff tells Bob Orr why the immigration reform package will benefit his department in the war on drugs and terror.

The agreement, which also mandates tougher border security and workplace enforcement, marked an extraordinary marriage of liberal and conservative goals that has the potential to bridge stubborn divides and ensure enactment of new laws this year.

Sen. Edward M. Kennedy, D-Mass., his party's lead negotiator on the deal, called it an example of the "politics of the possible," while conservative Sen. Jon Kyl, R-Ariz., said it was the "best opportunity" for a bipartisan solution to the nation's immigration problems.

It was soon under attack, however, from a set of lawmakers and interest groups as diverse as those that united to craft it. Their varying concerns and competing agendas — along with a challenging political environment — could be enough to unravel the painstakingly written agreement.

"It's a divisive issue, it's an emotional issue," Kennedy admitted on CBS News' The Early Show Friday.

Two of the key players in the talks from each end of the political spectrum, Sen. Robert Menendez, D-N.J., and Sen. John Cornyn, R-Texas, walked away from the deal before it was announced.

Conservatives branded it "amnesty," complaining that it would reward the nation's estimated 12 million illegal immigrants with a way of gaining legal status and staying in the U.S. permanently without being punished.

"What part of 'illegal' does the Senate not understand? Any plan that rewards illegal behavior is amnesty," said Rep. Brian Bilbray, R-Calif., chairman of the Immigration Reform Caucus.

Kennedy dismissed the "amnesty" criticism, saying, "That's sort of a slogan and a cliché."

The deal would allow illegal immigrants to come forward right away, but they could not get visas or begin a path to citizenship until the border security improvements and a high-tech worker identification program were in place.

After that, illegal immigrants could obtain a renewable "Z visa" that would allow them stay in the country indefinitely. After paying fees and fines totaling $5,000, they could ultimately get on track for permanent residency, which could take between eight and 13 years. Heads of households would have to return to their home countries first.

Added late in the negotiations was the Dream Act, reports Attkisson. Immigrants who came illegally as children and are now in college or the military could stay and get a green card in just three years. This would be the fastest path to citizenship.

But security officials caution it will take years for the immigration reforms to take full effect if signed. And they concede that's a problem, with an urgent need for change right now.

The sheer scope of the challenge facing U.S. Customs and Border Protection agents is staggering: CBS News correspondent Bob Orr reports that just last month, nearly 106,000 illegal aliens were arrested trying to enter the country, 99 percent of them along the porous Mexican border.

The truth is almost all of those apprehended by agents are not dangerous felons, but rather workers looking for jobs.

"I'd rather get the housekeepers and the landscapers in a visible, regulated program where they have to pay a fine and they have to obey the law, so I can focus all of our energy on the people that everybody agrees is the big threat," Chertoff told Orr.

The key will be the ability to identify alien workers. Those seeking legal status will be issued tamper-proof IDs complete with fingerprints and photos.

Those without IDs will draw extra scrutiny. The current system is overwhelming for border agents who struggle to identify the truly dangerous among the masses.

"There is no practical way that they can actually detect on a regular basis those who might really be a threat to the United States," said CBS News homeland security analyst Paul Kurtz.

However, the plan was bad news for tens of thousands of poor Mexicans who depend on a U.S. guestworker program for temporary jobs in agriculture and other seasonal work, such as landscaping and construction.

Millions of would-be migrants have been holding tight to President Bush's promise that they could one day apply for temporary visas.

At the U.S. Consulate in Monterrey, which hands out more temporary visas than any other consulate or embassy in the world, Edmundo Bermudez, a 36-year-old from the northern city of Durango, said the plan rewards those who have already entered the United States illegally, while shutting out those who stayed home hoping to gain legal passage.

He was especially offended by the plan to give preference to migrants with degrees and skills.

"The United States already has enough people with college degrees. Who is going to cut their tobacco?" asked Bermudez, who has been working intermittently in the U.S. for the past eight years. In Mexico, he makes about $10 a day, while in the U.S. he earns almost that — $8 — in an hour.

Liberals, on the other hand, are unhappy with the proposal because it makes a far-reaching change in the immigration system that would admit future arrivals seeking to put down roots in the U.S. based on their skills, education levels and job experience — limiting the importance of family ties.

"We have concerns about the historic shift away from family unification as the backbone of our immigration system," said Kevin Appleby of the U.S. Conference of Catholic Bishops.

Immigrant advocacy and labor groups also oppose the terms of a new guest worker program in which low-skilled immigrants would be forced to leave the country after temporary stints and would have limited opportunities to stay and get on a path to permanent legalization.

"Without a real path to legalization, the program will exclude millions of workers and thus ensure that America will have two classes of workers, only one of which can exercise workplace rights," said John J. Sweeney, the AFL-CIO president.

Sen. Byron Dorgan, D-N.D., announced Thursday that he will move to kill the guest worker program because it would hurt American workers.

Many liberal groups, which revere Kennedy as his party's decisive voice on immigration, reserved judgment on the deal, calling it a good starting point and holding out hope of improving it during next week's Senate debate. But they also voiced substantial worries.

Jorge Mursuli of People For the American Way said the measure "departs radically from America's immigration tradition of putting family reunification first. This bill also includes a future worker program that is destined for failure." Mursuli nonetheless called the plan a "solid start."

Presidential politics could also complicate the deal's chances. Fissures among the candidates started emerging swiftly after it was announced.

Sen. John McCain, R-Ariz., who helped shape the deal, called it "long overdue." However, Mitt Romney said it was the "wrong approach," which provided "a form of amnesty" to illegal immigrants. Fred Thompson, who is considering entering the race, said it should be scrapped in favor of a measure to secure the border.

Democratic Sen. Barack Obama, D-Ill., who is seeking his party's presidential nomination, said the proposal needed more work. "We need to fix our immigration system, but we should not replace one dysfunctional, broken system with another equally troubled system," Obama said.