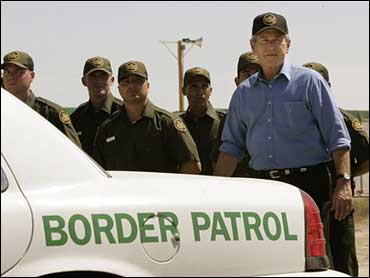 With U.S. lawmakers preparing for the contentious work of negotiating a compromise on immigration reform legislation, President Bush tried to stress areas of agreement during a visit to New Mexico on Tuesday.

"We're making progress toward a comprehensive bill," Mr. Bush insisted, noting that since his last visit to the border last month the Senate has passed legislation that would allow foreigners to get temporary work permits in the United States.

The House has passed a stricter bill that focuses on border security to keep immigrants out. If the president is to achieve his goal of getting a new comprehensive law, members of the House have to sign on to the more welcoming measures in the Senate bill, including provisions allowing illegal immigrants to become citizens. "This is the toughest part of the bill for the Congress," the president acknowledged.

"While the differences grab the headlines, the similarities in approaches are striking," President Bush said from the Border Patrol's training facility here. "We all agree we need to control our borders. There's a common agreement that the federal government has a responsibility to control the borders so that every illegal immigrant caught at the border needs to be sent home."

The president said it's also necessary to have other reforms that not everyone supports — a temporary worker program for immigrants to take low-paying jobs and a path to citizenship for illegal immigrants who have been living in the United States for a long time.

"I believe strongly this — that if we don't address all the elements together, none of them is going to be solved at all," President Bush said.

Mr. Bush shed the suit that he was wearing to board Air Force One for the long flight west and delivered his speech in rolled-up shirtsleeves. The former Texas governor said he felt at home in the hot, dusty climate.

"I knew I was in good company when I saw all the cowboy hats, and I think I saw one guy spitting in a can," he said.

President Bush spoke from the academy where 571 students were in the midst of training to become agents. The enrollment has been increasing rapidly as part of the Bush administration goal of doubling the number of agents from 9,000 to 18,000 during his presidency. "You're going to be busy here at this facility," he said.

Currently there are about 11,300 agents nationwide, 10,900 of them are on the southern border, according to Maria Valencia, a spokeswoman for U.S. Customs and Border Protection. Bush is sending 6,000 National Guard troops to the southern border to help strengthen patrols until more agents are in place.

Every agent must pass 19 weeks of courses in Artesia, including instruction in driver's education, Spanish, firearms and the law. The Border Patrol has a $13.7 million budget this year for training, Valencia said.

Before his speech, the president was given a look at various ways that students at the facility train through role-playing. He boarded a bus while "passengers" ID cards were checked, watched as students and instructors pored over several rail cars — checking everything, including the undercarriage — and saw agents in action at a mock border checkpoint. The finale at the school's "Practical Exercise Area," located in a span of dirt and dust, came as agents with guns drawn "pulled over" a car with supposedly suspicious occupants.

President Bush, wearing a black and yellow U.S. Border Patrol hat against the heat that was already searing by midmorning, said little during his tour. After his speech began, it became apparent that the exercise was set up solely for his benefit, as all activity had stopped and the field was cleared of all personnel.