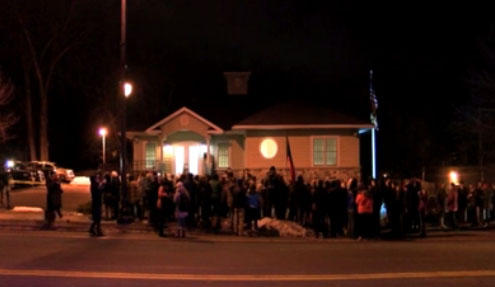 The station says agents took two women, their five young chidren and the women’s 12 year old brother into custody after being called to the scene of a traffic stop by police in Geneseo.

Demonstrators told WROC the women are migrant workers and the family van was stopped for alleged child car seat violations.

The New York Immigration Center tweeted its take on the unfolding events:

The Workers Justice Center of New York says one of the women and the younger brother were then taken by ICE to the detention center in Batavia, N.Y. Her three children, all under the age of four, and the women’s sister and her children were released.

Protesters told WROC two people were arrested when they tried to block a law enforcement vehicle from removing the families from the Irondequoit detention center. Geneseo police were unavailable for comment.

Another protest was planned for Friday, this one at the federal building in downtown Rochester.