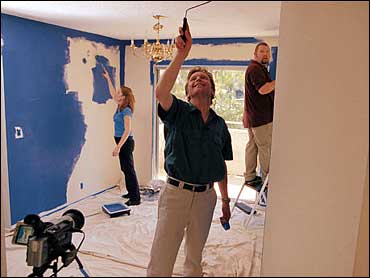 A poll conducted last year for HGTV revealed that television viewers considered "Trading Spaces" one of their favorite shows on the cable channel.

One problem: It's on TLC, not HGTV.

"Trading Spaces," the remodeling show where neighbors impose their decorating tastes on neighbors, was the most popular show on basic cable last week, eclipsing professional wrestling and "SpongeBob SquarePants."

It has spawned imitators and transformed home improvement television.

Nowhere is that more evident than at HGTV, a network built on home design that somehow missed out on the biggest home design sensation on television.

One, already on the air, is "Design on a Dime," which applies the TLC show's concept of strict spending limits in inviting designers to remodel homes.

The second, coming in March, is "Ground Rules!" - which, HGTV says, "challenges homeowners to redesign and install their landscaping in friendly competition with their neighbors within a limited budget and time frame."

To be fair, HGTV shows like "Designing for the Sexes" and "Designers' Challenge" predated "Trading Spaces." But in developing new programs, they've ramped up the energy level.

"Some of the shows we have are absolutely adding an element of entertainment," said Burton Jablin, HGTV's chief executive. "Yes, we do look at the competition, but fundamentally we believe we have the strength in our product. We believe in developing programs that build the relationship between viewers and HGTV as opposed to developing a hit mentality."

HGTV had a chance to air "Trading Spaces," but passed. The show is an American version of a British show, "Changing Rooms," which has become a lot more visible on BBC America since its offspring took off.

HGTV was offered a chance to lease the concept for American television but, at the time, it wanted to own its own programming outright, Jablin said. He said he's not kicking himself, but it's worth noting that HGTV's ownership policy has since changed.

Jablin puts a positive spin on the survey that erroneously found "Trading Spaces" one of HGTV's most popular shows.

"I think that would make TLC cringe," he said. "I'm perfectly happy with that. What's great about these kinds of surveys is it says to me we are really doing what we set out to do, which is establish a brand that is associated with a certain type of programming."

"What `Trading Spaces' did was to take a category that was rather stale and linear and turn it on its head," said TLC programming chief Roger Marmet. "It is a show about design and how-to, but by and large it's an entertainment program. It's got so many different layers to it that people will watch for different reasons."

TLC has already successfully nicked its own concept with "While You Were Out," where a spouse is coaxed out of the house to give designers time to transform it.

The transformation theme is also evident in TLC's upcoming "What Not to Wear," which trains hidden cameras on a fashion catastrophe then sends designers in to transform the wardrobe. The ABC special, "Extreme Makeover," transformed physical features instead of just clothes. It's soon to be a series.

Even VH1 imitated "Trading Spaces" with "Rock the House," which sent rock stars like Sammy Hagar to show off their decorating tastes in the homes of unsuspecting fans. "Cribs," with rich musicians giving tours of their homes, is popular MTV fare.

Ray Murray, development director for the Philadelphia-based Banyan Productions, maker of "Trading Spaces," has been flooded with ideas and interest from other networks. He's trying to play it cool and avoid imitations so as not to alienate TLC, for which his company produces several shows.

He's readying several special "Trading Spaces" editions, including blooper shows and episodes that involve whole families. One gimmick - a live "reveal" (the moment when a couple sees what their neighbors have done to their house) - aired in January.

"You can take the concept of `Trading Spaces,' a surprise `reveal' and experts and facilitators, and almost apply it to anything," Murray said.

Denise Cramsey, executive producer of "Trading Spaces," is actually glad for one spinoff. She wants to volunteer her messy home for "While You Were Out."

She won't submit to her own show, however.

"I don't trust my neighbors," she said.