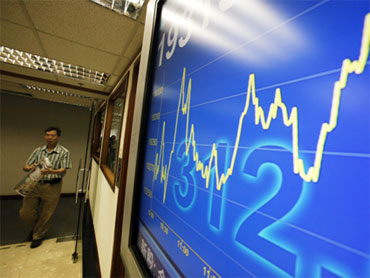 The Washington-based IMF raised its 2010 world growth forecast to 4.5 percent from 4.1 percent in April. Its U.S. growth forecast rose from 2.7 percent to 3.3 percent. The outlook for the European nations that use the euro common currency was unchanged at 1 percent.

But in its quarterly World Economic Outlook, the IMF warned that "risks have risen sharply" due to Europe's financial turbulence. It said European leaders need to act quickly to resolve debt problems and restore confidence in their banks.

Europe's debt risks are "threatening to spill over to other regions" and reverse recent gains, the agency said in a separate Global Financial Stability Report.

Global economic indicators stabilized at a high level in May, with industrial output and trade posting double-digit growth, the agency said. It said there was a modest but steady recovery in developed economies and strong growth in emerging nations.

However, it warned that any slackening in Europe's recovery "would affect Asia through both trade and financial channels."

Weak data from major economies in recent weeks have diminished confidence in a strong rebound from last year's recession.

The IMF said European leaders must act quickly to rebuild confidence. It said they must resolve uncertainty about banks' exposure to government debt and other risks and make sure lenders have enough capital and markets have adequate liquidity.

It said many advanced economies urgently need to push ahead with financial system reforms including recapitalizing banks, restructuring and consolidating banking industries and overhauling regulation.

"In the absence of complete banking sector recapitalization and restructuring, the flow of credit to the economy will continue to be impaired," the IMF said.