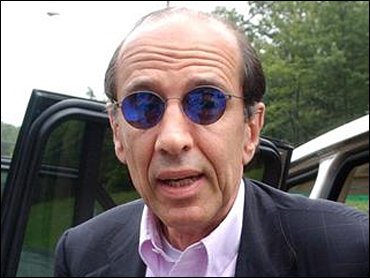 Government regulators brought a civil charge of insider trading against the father of former drug-company executive Sam Waksal on Friday, saying the father sold more than $8 million of stock based on a tip from his son.

The charge against Jack Waksal, 82, was made in a lawsuit filed in U.S. District Court in Manhattan, where Sam Waksal pleaded guilty a year ago to securities fraud for tipping his daughter to dump ImClone Systems Inc. stock just before a negative government report was issued.

Reached by telephone at his East Hampton residence, Jack Waksal said he had not heard of the charge and did not yet have a lawyer. The government said he also has a residence in Hallandale, Fla.

Sam Waksal is serving a sentence of seven years and three months at the Schuylkill Federal Correctional Institution in eastern Pennsylvania. In pleading guilty to six of 13 counts, the younger Waksal did not admit to any of the counts involving his father.

In court papers, the SEC said Sam Waksal tipped his father after learning privately on Dec. 26, 2001, that the U.S. Food and Drug Administration would issue a negative report on ImClone's cancer drug, Erbitux. As a result, the SEC said, Jack Waksal sold more than 110,000 shares of ImClone stock for more than $8 million on Dec. 27 and Dec. 28, 2001.

The FDA report, when later made public, caused the value of the company's stock to plummet.

The SEC said Jack Waksal later provided false and misleading explanations for his trades and falsely testified about the events of Dec. 26 through Dec. 28 when the SEC questioned him.

In a recent interview with CBS News 60 Minutes Correspondent Steve Kroft, Sam Waksal admitted the threat of charges against his father were a factor in his decision to plead guilty to six of the 13 counts against him.

"I think that the federal government does anything it can to win its cases. And if I were a prosecutor, I probably would, too," said Waksal.

But he said threatening to prosecute his father was wrong — but effective.

"What, my 80-year-old father who is, you know, a hero, who never did an illegal thing in his life? I wasn't going to let that happen."

"If he is come to the view that he is protecting his father and his daughter, that's a noble view," U.S. attorney James Comey told 60 Minutes. "I wish he had thought of that before he sent them in to the SEC to lie for him."