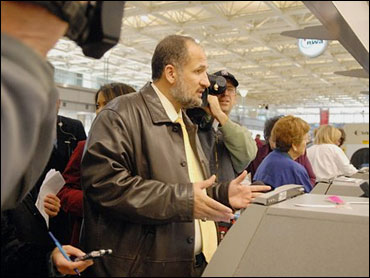 Six imams who were removed from a US Airways flight in Minneapolis in 2006 have reached a tentative settlement of their discrimination lawsuit.

The imams' attorney, Omar Mohammedi, said Tuesday that all sides agreed to the settlement at a conference Monday. But he says the details still need to be finalized and the settlement needs to be approved by a federal judge.

Mohammedi declined to comment on the terms of the settlement but says the imams are satisfied with it.

An attorney for US Airways, Michael Lindberg, declined comment.

A spokesman for the Metropolitan Airports Commission had no immediate information.

The Islamic religious leaders were removed from the flight in Minneapolis in November 2006 after passengers reported what they considered suspicious behavior.

The imams, who were handcuffed and questioned, sued the Tempe, Arizona-based airline, several airport police officers and an FBI agent on several grounds, including discrimination and false arrest.

US Airways refused to book the imams on another flight. The imams, who had been in Minneapolis for a meeting of Islamic religious leaders, eventually caught Northwest Airlines flights home to the Phoenix area and Bakersfield, California.

"Maybe the only surprise is that it took this long and I'd be shocked if the judge doesn't approve the deal to get this case off the docket," Cohen said.