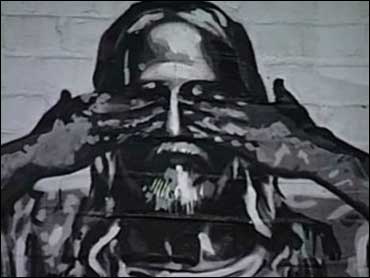 Jonathon Elias of WBZ in Boston reports on the mysterious appearance of a life-sized portrait of Jesus that showed up on the wall of a video store in New Bedord, a small city south of Boston.

The seven-foot picture of Jesus showed up on the side of the building sometime around Friday night into Saturday morning. And ever since this picture appeared, so have the curious and the faithful. Flowers and a candle have been left at the feet of the portrait.

There are two mysteries surrounding the statue, Elias reports.

Who did this, and why is Jesus covering his eyes?

"The message is we're in deep doo-doo," said one woman.

"I don't know ...Maybe he doesn't want to look at New Bedford anymore," said another man.

Here is the story and video.: