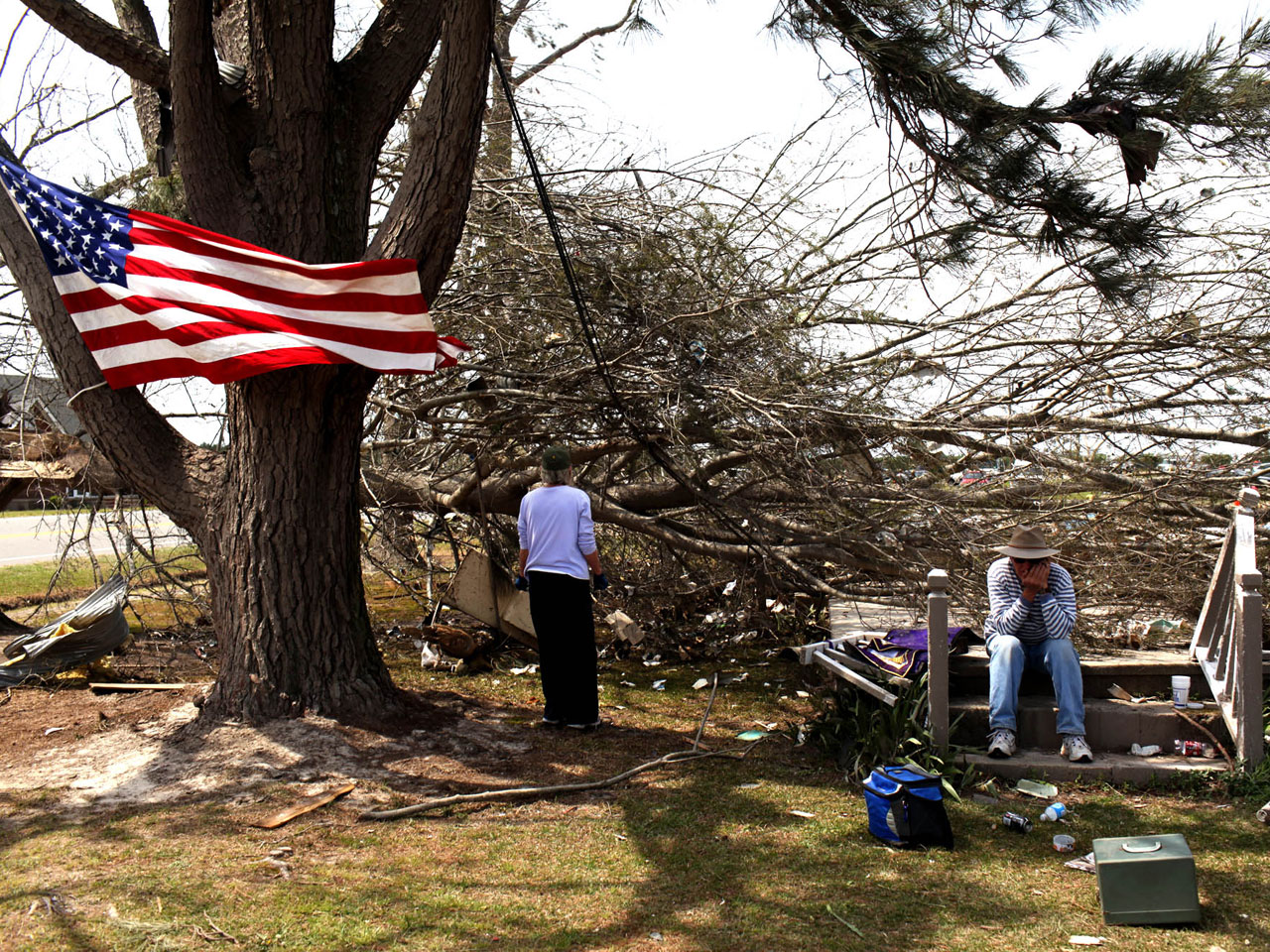 BONNETSVILLE, N.C. — Shards of glass from old bottles and furniture smashed by a tornado that tore through town littered the concrete floor of Rhonda Carter's antique store, shattering her plans to open an auction house in nearby Salemburg. A storage area in the back was flattened.

"I just had a feeling something bad was going to happen, and it did," Carter said of Saturday, when storms raged through Bonnetsville and other parts of North Carolina, killing at least 22 and damaging or destroying more than 800 homes. "Now I'm starting over."

From remote rural communities to the state's second-largest city, thousands of residents hit by the worst tornado outbreak in nearly 30 years were clearing away rubble and debris, repairing power lines and facing a recovery that will cost tens of millions of dollars.

The storms that chugged across the South last week killed at least 45 people in six states, but the worst devastation came over about four hours Saturday in North Carolina. Officials were still tallying the toll, with police in Raleigh announcing that a 6-month-old child who had been in the hospital ended up dying from her injuries.

"In the blink of an eye, so many people have been plunged into grief and crisis," said Preston Parrish, executive vice president of ministry at the Billy Graham Evangelistic Association, which dispatched its disaster-response teams to four areas of the state.

One was Bertie County in the state's northeast corner, where the ministry also deployed volunteers just seven months ago, after floods devastated the county seat of Windsor and surrounding communities.

At least two tornadoes hit the county in rapid succession, one doing enough damage to kill 11 people. The twisters descended suddenly, with only about 15 minutes of warning.

"I saw it coming, we got in there, and as soon as we hit the door, boom, it hit," said Roy Lee, whose house was destroyed. "About three minutes max it was over."

When it was over, Lee's neighbor, 60-year-old Peggy Leary, was dead.

Gov. Beverly Perdue and other officials toured the damage Monday, pledging prompt support to rebuild. Charities, religious groups and emergency shelters sprang into action, offering their services to residents well-versed in disasters like hurricanes, who suddenly found themselves in the path of a very different type of storm.

Bertie County so far is the only county with a monetary damage estimate available. Property damage was at least $2.5 million, but that figure doesn't include infrastructure damage or the loss of crops. Bertie County produces tobacco, peanuts and soybeans, among other staples. Statewide, costs will likely be at least in the tens of millions because the weather raged through densely populated cities, trashing homes, businesses and public buildings.

Employees in Wake County, where Raleigh is located, estimated Monday that local costs will be around $65 million, county commission Chairman Paul Coble said, an estimate he expects to rise.

One mobile home in Raleigh was the site of four deaths, including 6-month-old Yaire Quistian-Nino, who had been listed in critical condition at a nearby hospital. Yaire was killed along with her 9-year-old brother, Daniel Quistian-Nino, and two cousins, 8-year-old Osvaldo Coronado-Nino and 3-year-old Kevin Uriel Coronado-Nino.

Authorities have said that Yaire's mother moved all the kids into a closet when the storm came in but that a large tree fell on the home. Police have said the mother was momentarily knocked unconscious but survived.

In Roseboro 60 miles south of Raleigh, Larry Tanner had heard the warnings on TV, but at home with his wife and two of his three children, he looked outside and it was sunny.

He thought he was safe until his son, Jonathan, 19, a volunteer firefighter, walked in and his pager went off. A tornado had just touched down in Ammon about 10 miles way. Tanner walked outside and spotted a funnel cloud headed toward the house.

"Turn around," he shouted at his son.

Jonathan was trapped inside the front door. The column from the front porch hit him on the head, cutting a deep gash. The windows blew out, sending shards of glass flying like shrapnel.

Tanner was knocked on his back and watched as the winds ripped the roof off the house.

It lasted about a half-minute.

"It was terrible. I couldn't breathe. The dirt and debris got in my lungs," Jonathan recalled Monday, his voice trailing off. He was quiet for a moment.

"I thought we were going to die."

More than a quarter-million people lost power during the storm, but by late Monday that had dropped to a few thousand. The storm not only brought down power lines, but crews responding to outages found the storm had been so strong that some wires had simply vanished.

Emergency workers took damage estimates to see if uninsurable losses reach $10.3 million, the minimum amount needed for North Carolina to qualify for federal disaster assistance. Residents without insurance were advised to take photos of the damage before they clean up. And the emergency workers tell everyone to put debris in two piles: construction materials and vegetative materials.

But beyond the material losses are injuries that won't be remedied as quickly.

Gary Cary, 46, who lives in Roseboro, got his wheelchair up a ramp into his mother's house moments before a tornado blew through the area, shattering the home's windows. Both he and his mother lived, but his own home was obliterated. Worse, he said, was the death of Possum, the 8-year-old calico cat he called "my right arm."

"I could have lost my life," he said. "My mother could be gone. It's just rough. Real rough."