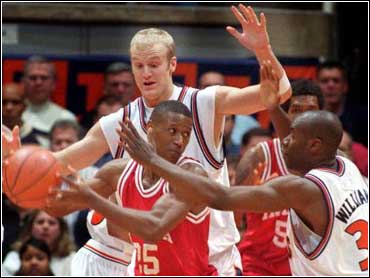 Illinois knew that beating No. 16 Indiana might be the last chance to recapture some of the national respect lost after a 1-2 start in the Big Ten.

The Illini embraced the opportunity, using a pressing defense and long-range shooting to rout Indiana 87-63.

"We can play with anybody anybody," said Cory Bradford, who hit five of Illinois' 13 3-pointers and scored 26 points.

The Illini (18-7 overall, 10-4 Big Ten) have won seven straight and nine of 10, but were yet to beat a ranked team during that stretch.

Indiana, coming off a loss to No. 6 Ohio State last weekend, dropped consecutive games for the first time this season in large measure because leading scorer A.J. Guyton continued to struggle.

Guyton, held without a basket the last 13 1/2 minutes against the Buckeyes, made just one Tuesday and scored three points. He averages almost 21 a game. Indiana coach Bob Knight kept Guyton on the bench all but two minutes of the second half.

"Players have rough nights," Illinois' Lucas Johnson said. "But we really keyed our defense on him tonight."

The Hoosiers did themselves in early. Indiana spotted Illinois a huge first-half lead by giving the ball away 13 times. Seven of those turnovers were steals.

Knight and several Illinois players used the same word "manhandled" to describe what happened to the Hoosiers.

"You can get beat and be in the game," said Knight, who made a statement courtside, but did not take reporters' questions. "That had nothing to do with our game tonight. They just beat the hell out of us from beginning to end."

Illinois started burying the Hoosiers under 3-pointers midway into the half.

"We were attacking," said Illinois coach Lon Kruger, who had been pressing Bradford especially tkeep shooting through his cool streaks. "We weren't on our heels. Sometimes we get a little intimidating. We stayed aggressive tonight."

Lucas Johnson's 3-pointer at the 13:50 mark of the first half started the Illinois bombing. Bradford followed with consecutive 3s and Johnson added another to spark a devastating 24-4 run that lasted nearly seven minutes.

Reserve Sean Harrington's 3-pointer gave Illinois a 37-14 lead with 7:12 to go in the half. Illinois stretched that lead to 43-16 before Indiana awoke to score nine straight points.

The Hoosiers couldn't challenge, however. Illinois, leading 49-28 with 55 seconds left in the half, converted Frank Williams' steal into a 3-pointer by Bradford at the buzzer that made it 52-28 at halftime.

"It's not mechanics," said Bradford, who was down after shootings 3-for-13 in his last outing. "I've always been getting good looks. I just have to trust that jumper and hope that it falls."

Bradford, Williams and freshman center Brian Cook each had 3-pointers in the early part of the second half as the Illini built a 66-36 lead with 13:10 left.

Kyle Hornsby's 3-pointer with 4:20 left got Indiana within 80-58, the closest the Hoosiers could get.