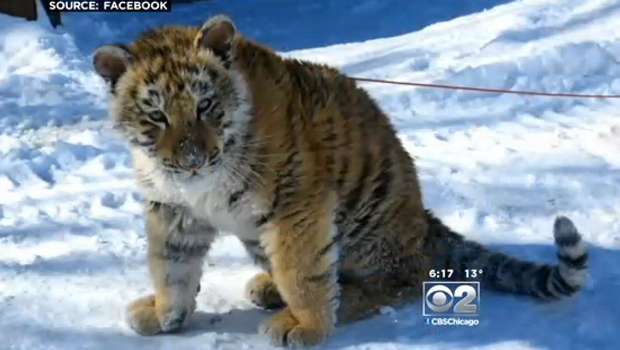 CHICAGO - There's an old joke: Where does a tiger go for a walk? CBS Chicago reports.

The punch line: anywhere it wants.

But police in suburban Lockport, Ill., 30 miles south of Chicago, are not laughing after a tiger cub took a stroll through the city's downtown on Sunday - albeit on the end of a leash, the station says.

Basile's tiger apparently bit a woman in the bar in December, although she never reported it, Blakely reports.

"My concern was really for the people who frequent the downtown area," Lockport Police Chief Terry Lemming said.

Basile runs the Big Run Wolf Ranch just outside Lockport, which CBS Chicago describes as a collection of cages where he keeps wolves, mountain lions and the tiger.

His ranch is a federally licensed business that invites the public for scheduled open houses and takes the animals for show to schools and charities, the station reports.

Basile's attorneys said he "has been cooperative with the authorities and looks forward to his opportunity to address the allegations in court."

He has been rescuing, housing, and teaching with wild animals for nearly 30 years "without incident," they said.