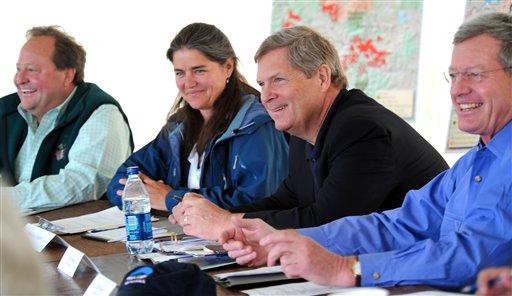 The Department of Homeland Security has stopped short of reassuring illegal immigrants victimized by Hurricane Katrina that they can seek help from relief agencies without fear of arrest, a promise the federal government made after the Sept. 11, 2001, attacks.

Spokeswoman Joanna Gonzalez refused to directly answer repeated questions about whether the agency can assure illegal immigrants that their information would not be turned over to law enforcement agencies when they seek help.

"We want to provide food, water, shelter and medical supplies to everyone. No one should be afraid to accept our offers to provide safety," Gonzalez said in an e-mail message.

Rescuers have not been asking people whether they are in the country legally when they are rescuing them, she said. She said she has repeated that Spanish-language television and radio.

Asked several times Thursday for an update to her response, Gonzalez said there were no updates.

Border Patrol and Immigration and Customs Enforcement officials are assisting in the hurricane response and helping to find survivors.

Ten days after the Sept. 11 attacks, then-immigration chief James Ziglar issued a statement encouraging undocumented immigrants who thought they had lost friends or family in the World Trade Center to contact local authorities. He said they could do so without fear authorities would try to get their information for immigration purposes. He repeated the statement in a New York news conference a few weeks later.

Mexican President Vicente Fox has said the United States agreed with his request not to prosecute undocumented Mexican migrants affected by Katrina and who turn to U.S. officials for help.

Gonzalez said Homeland Security has been on Spanish-language television and radio to let immigrants know "we are not going to ask you who you are or what you are because our priority is to save lives."

Latin American nations have been trying to locate citizens affected by Katrina and were worried that illegal immigrants may not seek help for fear of being deported. Tens of thousands of Latin Americans, most from Mexico and Honduras, had been living in the New Orleans area.

Citizenship and Immigration Services plans to naturalize five hurricane victims who were previously scheduled to become citizens but whose swearing in was canceled because of Hurricane Katrina. They will be naturalized Thursday in Memphis, Tenn., where New Orleans operations have moved, said Bill Strassberger, CIS spokesman.

CIS had to cancel seven naturalization ceremonies that were scheduled for this month in New Orleans and won't be scheduling any more there any time soon.

The agency said its New Orleans files were not damaged, but two New Orleans staff members were missing.

People who had immigration applications or other paperwork pending at the New Orleans office can go to any of the agency's other offices in the country to replace documents or complete applications, Strassberger said.