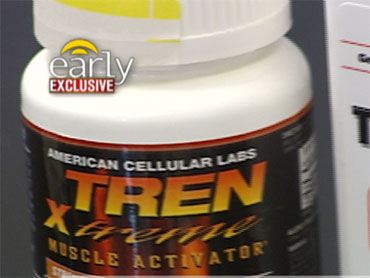 Since the first CBS News story aired last March, the Food and Drug Administration (FDA) has begun to crack down on designer steroids like Tren, but as CBS News correspondent Kelly Cobiella reported on "The Early Show," they're still very available -- and very dangerous.

Using a hidden camera at a supplement store, Cobiella spoke with an unidentified salesman who, referring to Tren said, "I saw a decent amount of size -- and it leaned me out."

"The Early Show"'s "Early Eye" investigation on over-the-counter steroids aired Monday, there's been plenty of talk at supplement stores, in gyms and online about so-called "prohormones" such as Tren, including discussions of how they work, and the effect they can have on organs like the liver.

Maryland Congressman Elijah Cummings told "The Early Show," "I would guess that 85 percent of the people know exactly what they're doing. There's been too much publicity with regard to this area. They know."

However, as Cobiella and her team saw at supplement stores, it's not always easy to tell what's safe, and what may be a dangerous anabolic steroid.

Tyrone LaRose started taking Tren last fall to put on some weight, and to get more serious about bodybuilding and his bench press. The 42-year-old, who is going for his MBA in professional management, said if he had known Tren was an anabolic steroid, he "wouldn't have touched it."

"That's just not me," LaRose said."I don't do drugs, I don't do alcohol and I don't do steroids."

LaRose gained the weight he was looking for, going from 285 pounds to 335.

"At first I thought it was worth it, until I got ill," he said.

LaRose says he took less than the recommended dose -- about five pills a week for three months. Then he developed jaundice so severe his father had to take him to the emergency room.

Norman Edelen, LaRose's father said, "His eyes were almost cat green. And his complexion was terrible."

A biopsy revealed he had severe liver damage.

LaRose is part of a class action lawsuit against American Cellular Labs, the manufacturer of the "Tren Xtreme" product that he says took a heavy toll on his liver, and his skin.

LaRose is not the only one. Dr. Zeid Kayali, a liver transplant specialist at Loma Linda University Medical Center in Calif., was so alarmed about the severe liver damage he saw in a cluster of patients taking Tren, he reported them to the FDA.

Kayali said, "When you see multiple cases in a very short period of time in very healthy people who have no risk factor for liver disease, this is very alarming."

Dr. Don Catlin, a leading anti-doping expert, said, "There's nothing on the label that says your liver is going to rot. It may say somewhere on the small print that if you're an athlete be careful. But many times they don't."

Cobiella and her team had Catlin test the brand of Tren taken by LaRose and two others purchased online and at a supplement store.

Test results confirmed all three were anabolic steroids. All three are illegal supplements under the federal Food, Drug and Cosmetic Act.

So why are they still for sale?

Pennsylvania Senator Arlen Specter told Cobiella, "People assume that they've been cleared by the government by the Food and Drug Administration, which is not so. They're not subject to preclearance."

Specter is working on new legislation to make it easier for the Drug Enforcement Administration to classify designer steroids like Tren as controlled substances, such as heroin or cocaine.

Supplement industry spokesperson Dr. Daniel Fabricant, of the Natural Products Association said, "These folks are criminals. They're not part of the industry, and they need to be enforced against."

But with billions of dollars in profits, Cobiella remarked, it's an uphill battle. She added on "The Early Show" sports supplement marketers are 10 steps ahead of regulators in getting the next designer steroid to market. She said they just tweak a known illegal anabolic steroid by a molecule or two, and market it as a legal dietary supplement.

Are there safe alternatives?

Cobiella said there are protein powders and some other products. However, the alluring thing about Tren, she said, is that it actually works to build up muscles quickly.

But, she added, if you see a product and you're not sure what's in it, do your research. She said that, while these products don't say "steroid" on the package, if you do your research online, you'll know whether they are steroids from what people say about the product on the Internet.