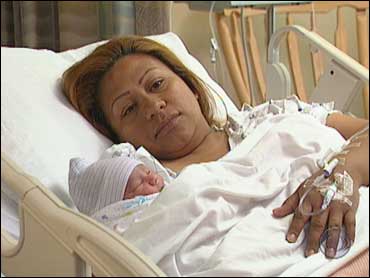 It was 5 a.m. and CBS News national correspondent Byron Pitts is with a woman who is nine months pregnant. She's rushed to a south Texas hospital to undergo a C-section - a $4,700 medical procedure that won't cost her a dime. She qualifies for emergency Medicaid.

She gave birth to a healthy, 8 1/2 pound baby boy - born in America. His Mexican mother gave him an American name: Eliot.

Eliot is one of an estimated 300,000 children of illegal immigrants born in the United States every year, according to the Pew Hispanic Center. They're given instant citizenship because they are born on U.S. soil, which makes it easier for their parents to become U.S. citizens.

That's because those babies can eventually sponsor their parents - when they turn 21 years old.

As for Eliot's mother, no longer as fearful of deportation, she told CBS News her name, Fabiola, and her story.

"So your son is an American citizen. What does that mean to you?" Pitts asked.

"I am very glad that he was born. That's why I came here - so my children, my husband and I could have a better life," she said through a translator.

Back in December, when she was six months pregnant, Fabiola, her husband and their two daughters - ages 4 and 11 - crossed the Rio Grande from Mexico into the U.S.

Once on the other side of the river they walked for two hours in search of a better life and free medical care for their unborn child.

"Do many women in Mexico make the choice to have their children in the United States?" Pitts asked.

"Yes," she said through a translator. "I know people who have done that. Things are much better here in the U.S. because they help children so much more."

It's a "better" life ... that American taxpayers help pay for.

Take healthcare for example -- an estimated $1.1 billion per year for undocumented men, women and children, according to the Rand Corporation.

Joe Riley is the CEO of the McAllen Texas Medical Center near the Texas-Mexico border. Forty percent of the children born there, nearly 2,400 last year, were the babies of illegal immigrants.

Riley has seen and heard it all.

"Mothers about to give birth that walk up to the hospital still wet from swimming across the river in actual labor … dirty, wet, cold," he said.

But here to have a child?

McAllen is part of a large hospital system. Like all hospitals, it is mandated by law to treat all emergency-room patients, not verify citizenship.

"We have uncompensated care of over $200 million a year," Riley said.

Rep. Lamar Smith, R-Texas, said: "It is not fair to the taxpayers who have to foot the bill."

Congress has all but given up on comprehensive immigration reform. But lawmakers like Smith want to solve birth citizenship to illegal immigrants, in part by challenging the 14th Amendment, which guarantees U.S. citizenship to any child born in America.

"It seems fundamentally wrong that we ought to give the greatest honor of their citizenship," Smith said. "His or her mother came across the border illegally."

Many Americans who struggle to take care of their own families think it is unfair that they should take care of a family and they are not U.S. citizens.

"I don't understand the resentment," said. "I know that God will help them, too."

That's what Fabiola's doing for young Eliot. Relying on her faith, her family … and the U.S. government.
MMVIII, CBS Interactive Inc. All Rights Reserved