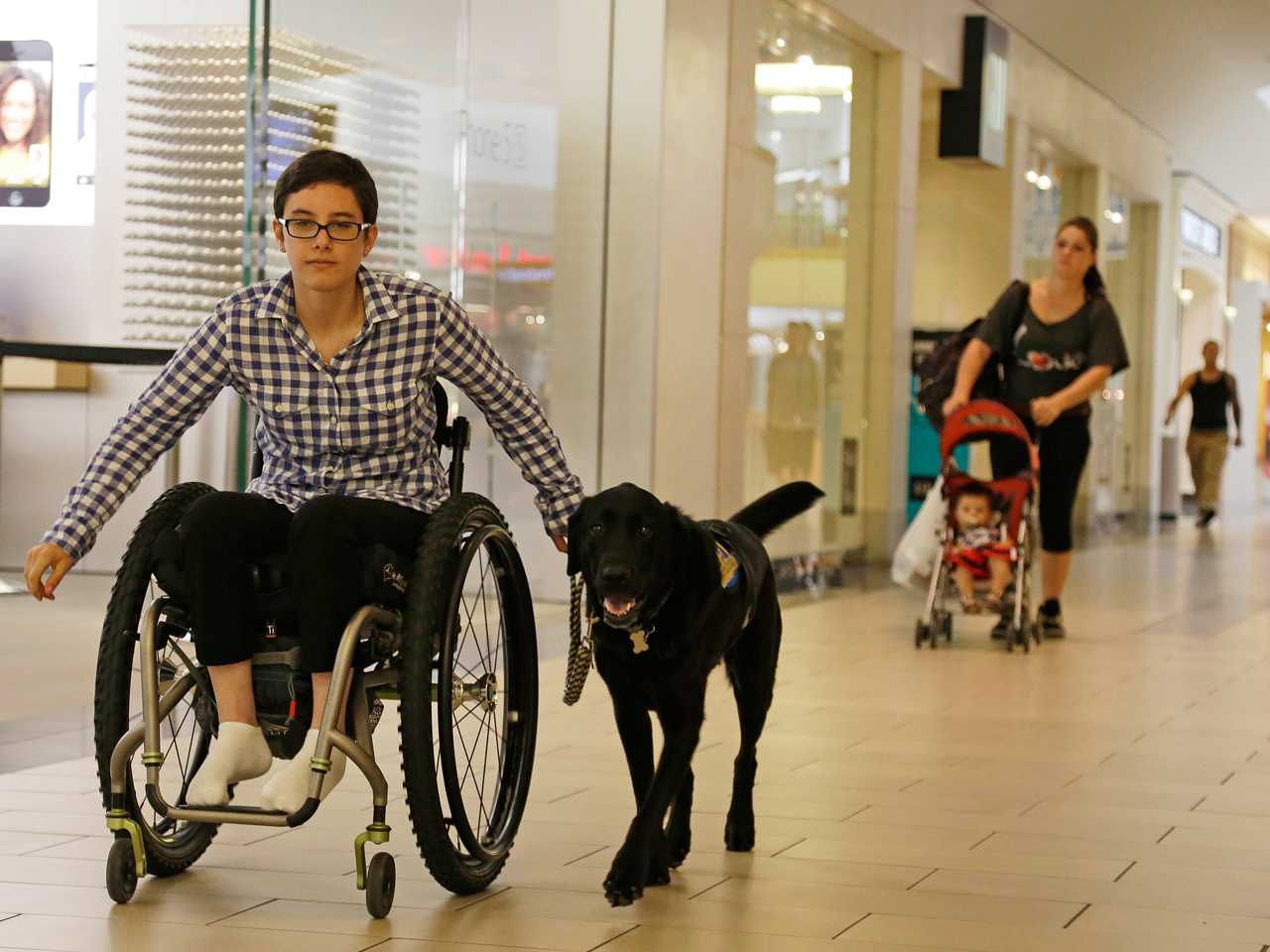 LOS ANGELESIt's an easy law to break, and dog cheats do. By strapping a vest or backpack that says "service animal" to their pet, anyone can go in stores and restaurants where other dogs are banned, creating growing problems for the disabled community and business owners and leading to calls for better identifying the real deal.

Those with disabilities are worried about privacy and the safety of their highly trained service dogs, while business owners are concerned about health violations and damage to merchandise from impostors abusing the system.

Under the Americans with Disabilities Act, it's a federal crime to use a fake dog. And about a fourth of all states have laws against service animal misrepresentation. But privacy protections built into the laws make it nearly impossible to prosecute offenders. It's even more difficult because no papers are legally required for real service dogs. Often, people who want to take their pets into restaurants or retail stores just go online to buy vests, backpacks or ID cards with a "service animal" insignia.

The law says those entering businesses with animals can be asked just two questions: Is this a service dog? What is it trained to do for you?

Efforts to make the law more prosecutable have begun, but few agree on what will work best. Ideas range from ditching privacy to doing nothing.

Corey Hudson, chief executive officer of Canine Companions for Independence in San Rafael and president of Assistance Dogs International, a coalition of training schools, is leading the effort to get the U.S. Department of Justice involved. He started writing to the agency 18 months ago but has not received a response.

Hudson wants to open talks and explore ways to identify the real from the phony.

But the International Association of Assistance Dog Partners in Michigan worries that bringing in the Justice Department could set back access rights won by those with disabilities in the past 20 years.

"While we deplore those who might be so unethical as to impersonate a disabled person by dressing their dog up as a service animal, we equally deplore the frenzy of alarm being stirred up about the risk of such abuse," said Joan Froling, chairwoman of the IAADP.

There needs to be a standard, said Jennifer Arnold, founder of Canine Assistants in Atlanta. "The sticky part is who will do the testing and what will be the criteria for allowing dogs to be considered assistance dogs."

An ID card might be the simplest answer, she said, adding that she doesn't think the loss of privacy will be the big issue that some think it will be.

There is a big difference in the behavior of real service dogs and impostors inside businesses, experts said. A true service dog becomes nearly invisible. Pets might bark, urinate, sniff, scratch and eat off the floor.

Real service dogs can be the victims of unruly fakes, said Wallis Brozman, 27, of Santa Rosa. She has dystonia, a movement disorder that left her unable to walk and barely able to talk. She needs a wheelchair, voice amplifier and her service dog, Caspin, who responds to English and sign language.

"When my dog is attacked by an aggressive dog, he is not sure what to do about it and looks to me. It becomes a safety issue, not only for my dog, the target of the attack, but for me if I am between the dogs," Brozman said.

Business owners also face problems. In August, Russell Ireland banned a dog from his Oxford, Mass., diner after its owner put a plate of food on the floor for the dog.

James Glasser claimed it was a legitimate service animal and took part in a boycott of the diner. There was talk of a lawsuit. Ireland apologized. The dog's actual status is unclear.

Marv Tuttle, a volunteer guide at the Monterey Bay Aquarium, said he believes he spots phony service dogs two or three times a week. He has also experienced the other side. Tuttle uses a service dog, Yara, because of a spinal cord injury from a traffic accident, and he and his wife were once stopped from entering a furniture store. "A girl greeted us and said she'd be glad to hold my dog outside," he said.

The clerk told them that two weeks earlier, a fake was allowed in the store and urinated on several expensive Indian carpets.

In terms of solving the dilemma, Tuttle doesn't think any kind of legislation will work.

"They can write new laws, but there is no way to enforce them. We don't have enough police to stop murders, much less stop people from hauling around pseudo service dogs," he said.