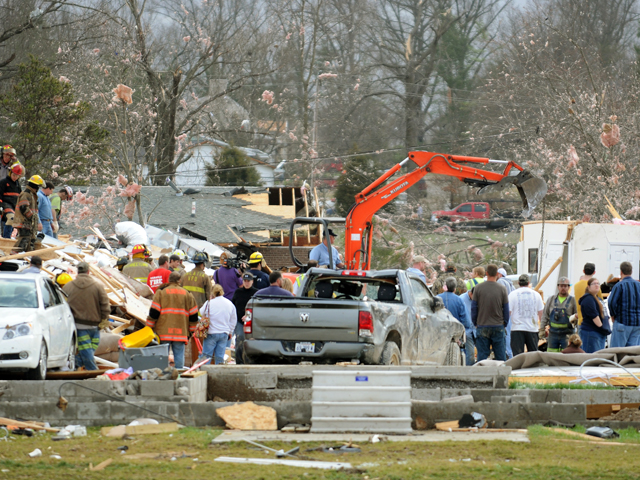 (CBS News) Residents across the Midwest and South are trying to get back on their feet following devastating storms that swept across the region on Wednesday. Several tornadoes hammered a swath of the U.S., killing at least 12 people and destroying entire towns.

In Tenn., at least three people were killed. Authorities say 50 homes in neighborhoods nearby Crossville were damaged and at least five were destroyed.

For more on Tenn., watch Elaine Quijano's report in the player below.

One twister was so big it was labeled an EF4 - the second highest rating given to tornadoes. Scientists say the tornado was 200 yards wide with winds up to 170 miles per hour.

In Harrisburg, Ill., the local newspaper's headline reads, "We will rebuild." The twister damaged 300 homes and businesses there. Already, damage estimates are in the tens of thousands of dollars.

Tammy Risley, a Harrisburg resident, told CBS News, "The sirens went off and...everything just came through. It was like my house inhaled and just let it out."

Risley said she felt like she cheated death. "I had a guardian angel watching over me," she said.

Now she's not sure what to do -- or where to go. Some people in Harrisburg took shelter with the Red Cross.

"It's amazing how some businesses and families -- their homes are intact, and across the street it's completely obliterated," said Quinn.

A collision between cold Rocky Mountain air and warm wet Midwestern weather spawned the tornadoes that stretched for hundreds of miles.

In Harveyville, Kan., Gemma Collins' house collapsed around her.

"I swear we were going to die," Collins said. "All I could do is pray."

Country music mecca Branson, Mo., was not spared. Some of its showcase theaters were badly damaged.

Utility crews were out overnight in Branson, attempting to restore power -- the first step toward recovery.

For more on the Harrisburg tornadoes and how the area is planning to rebuild, watch Dean Reynolds' full report in the player above.